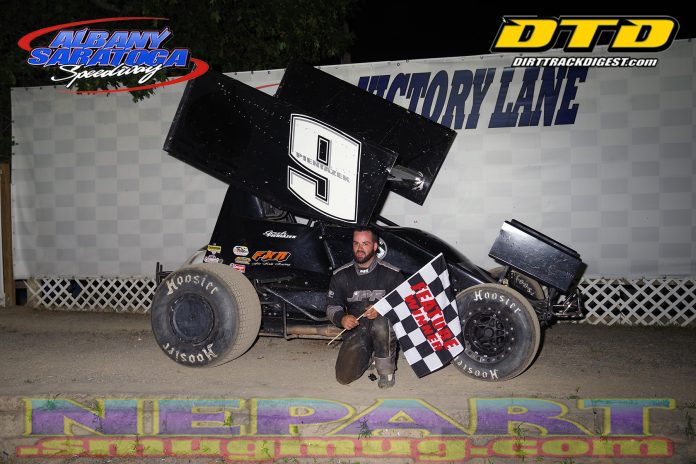 After a few weeks off the CRSA Sprint Tour presented by SuperGen Products with Champion Power Equipment returned to action Friday night at Albany-Saratoga Speedway. Twenty-seven cars would enter into competition. With the threat of weather in the area, track management and series management made an agreement to send all the cars to the A-Main event if they could all make the call. Unfortunately, after an incident in heat racing action the 112 of Mike Van Pelt would not be able to make the A-Main event.

Washingtonville New York’s Dan Hennessy and the Albany area’s own Josh Pieniazek would lead the twenty-six car field to the green flag. Pieniazek would jump out to an early lead. On lap six the field would see the first yellow of the evening as the 23 machine of Mexico New York’s Tyler Cartier would spin in turns 1 and 2. Cartier was able to continue and join the tail end of the field.


The race would slow again about ten laps in when the 77D of Pine Bush New York’s Tyler Boniface would spin between turns 3 and 4. The car was restarted and he would continue on. After the restart the race would come to a stop when the 32D of Stillwater New York’s Andy Durie jumped the cushion above the main racing line and made contact with the outside wall causing his car to flip violently down the front straightaway. Durie would climb out under his own power and was uninjured. Once safety personnel cleared the scene, cars were refired and Pieniazek would lead the field back to the green.

Racing action was again slowed on lap 12 as Middletown’s Michael Storms would spin to a stop on the inside of turn 4. He was able to continue on and joined the tail end of the field.

On lap nineteen the race would see its final caution of the evening as Masonville New York’s 25w of Dana Wagner and the 1HD of Edinburg New York’s Cory Sparks would come together as they were trying to navigate around lap traffic. Sparks was able to continue on after the incident.  Wagner’s night would come to an end as he would be towed pit-side on the hook with a broken steering arm.

On the final restart of the night defending CRSA Tour Champion Kyle Smith would challenge Pieniazek for the win. But this would not be enough.  Pieniazek would lead Smith and the 99 of Cooperstown’s Mike Kiser under the checkered flag to fill out the podium for the CRSA Sprint Tour A-Main event finish at Albany Saratoga Speedway.

Pieniazek would commandeer a long and sometimes dejecting path to finally find victory late in 2017.

“Just happy to get the win after all the 2nd place finishes over the last year and all of the races I’ve lead and should of won but had some sort of issue.”

With only a handful of races left on the schedule, the points battle is tightening up.  Thomas Radivoy currently leads with 1575. He maintains only a nine point advantage over second place Jeff Trombley and just 156 points ahead of the fifth place car of Dana Wagner.

The series takes a week off, but will return to action on Friday August 25th when they make a stop at Skyline Speedway in Cortland, New York. For more information and to keep track of the points battle, fans and teams can visit the CRSA Sprints Facebook and Twitter pages. They can also check out the website by going to www.crsasprints.com. 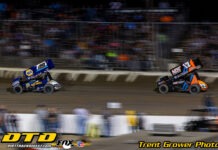