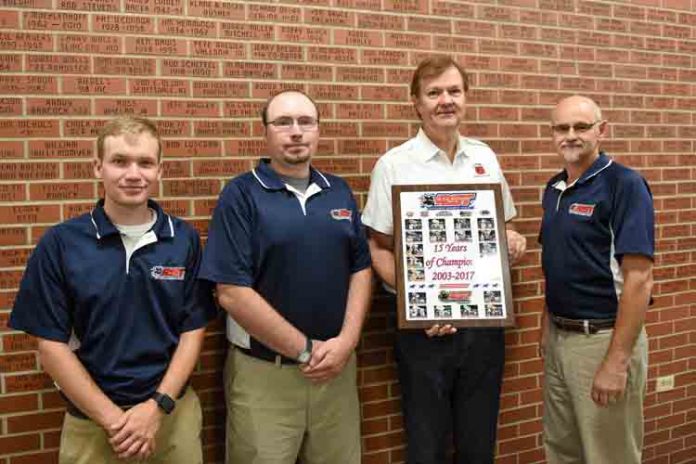 KNOXVILLE, IA – The National Sprint Car Hall of Fame and Museum in Knoxville, IA is lined with items representing the history of sprint car racing around the world. As part of the Patriot Sprint Tour’s 15th season, past tour champions will now be recognized next to the biggest names in the sport.

A commemorative plaque dubbed ’15 Years of Champions’ displaying each past champion of the Patriot Sprint Tour, starting with the inaugural season in 2003, was presented to the Hall of Fame and Museum this past week during the 57th annual Knoxville Nationals. Patriot Sprint Tour officials were on hand to present Bob Baker, executive director of the museum with the plaque.

“It is with honor and pleasure I represent the many drivers, teams, staff, marketing partners, families and fans that make up the Patriot Sprint Tour on a national stage,” stated Patriot Sprint Tour owner Mike Emhof. “We would not have been able to accomplish nearly as much as we have without the great support we have received throughout the past 15 seasons. I look forward to the next 15 and beyond.”

In total, 10 different drivers have their championship seasons recognized on the ’15 Years of Champions’ plaque. Starting in 2012, the Patriot Sprint Tour Canada tour was born, and as such the champions from each season of the Canadian tour are recognized as well.


Throughout the past 15 years, 7 different logos have symbolized the Patriot Sprint Tour. Each logo is proudly displayed on the plaque, further recognizing the history and growth of the tour.

As this seasons American tour is not yet complete, no champion for 2017 was recognized at the time of presentation. When a 2017 champion is crowned, the final plaque will be shipped out and replaced in the National Sprint Car Hall of Fame and Museum.