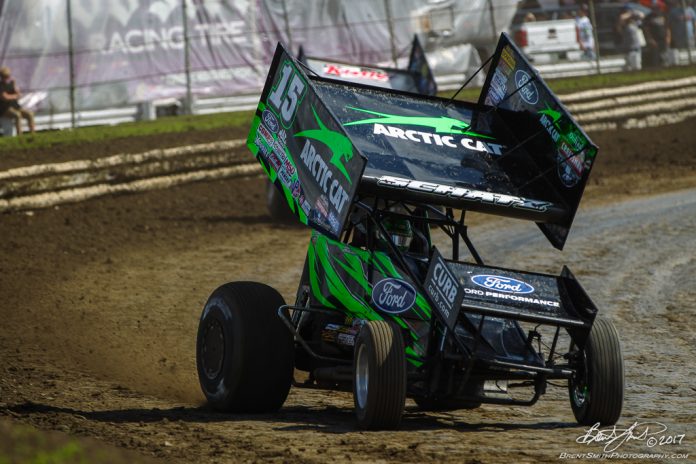 When asked if he learned anything from winning the 25-lap Late Model feature, Schatz said with a smile, “I learned that I am not in as good of shape as I think I am.”

Sheldon Haudenschild led the first eight laps, in search of his first career World of Outlaws Craftsman Sprint Car Series victory, before getting loose off of turn two and losing the lead to Brad Sweet. Schatz worked underneath Haudenschild shortly after and was second when the red flag flew for Canadian driver Thomas Kennedy, who was uninjured in the accident, on lap 12.

Sweet led the next three laps before Schatz pulled ahead with grip on the bottom on the 16th circuit. A lap 17 yellow for sixth place running Dominic Scelzi was the final stoppage of the event. Following the caution, Schatz and Sweet continued their duel and were side by side for multiple laps with Sweet being scored as the leader on the 18th lap. Schatz regained the lead on lap 19 and never looked back masterfully maneuvering through lapped traffic.


“It’s a huge weekend for this race team. Speaking of this race team…it is incredible what they do and an honor to drive their race car,” Schatz said.

Sweet settled for second. “The Ollie’s Bargain Outlet car was fast all night. I probably should have ran the bottom, but it’s hard to judge traffic when you are the leader. Donny’s always the guy to beat here, we’ll take our second and move on,” the Grass Valley, CA native said.