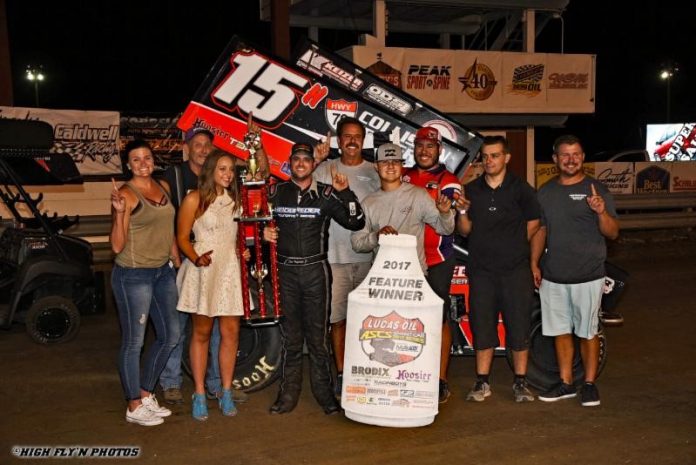 SEDALIA, MO – Picking up his second win of the season at the Missouri State Fair Speedway, Sam Hafertepe, Jr. made it 11 Lucas Oil American Sprint Car Series National Tour presented by the MAVTV Motorsports Network wins in 2017 with Sunday’s triumph at the “Historic Half-Mile”.

Taking his overall win total on the season to lucky No. 13, Hafertepe began his 25 lap quest from the cushion side of the front row with Aaron Reutzel taking the green from the pole.

Chasing the No. 87 on the start, Hafertepe ran anywhere from two to six car lengths away from Reutzel’s back bumper as the pair rolled up on traffic with five laps complete. Both running the cushion in turns one and two, Hafertepe began searching for options at the opposite end of the Speedway. Sliding himself through the third and fourth turns, Sam was on par with Aaron’s pace.

Working the eighth trip around the Missouri State Fair Speedway, the cushion in turn-two would end up being Aaron Reutzel’s undoing as the Momentum Suspension No. 87 hopped the curb and spun to a stop off the exit of the second turn.

“Traffic was tough, and I knew Aaron was going to be running hard and that’s what happened is he ran just a little too hard in traffic and got bottled up and gave us a clean track,” commented Hafertepe who has one four Lucas Oil ASCS National Tour events in Missouri. “I wasn’t really trying anything. Really, I was just waiting for him to mess up. That was my game plan the whole race because we just had a really good car.”


Handing the Heidbreder Foundation Service/Keith Dobbs Motorsports No. 15h command of the A-Feature, as the field reverted to Lap 7, Sam was gone quickly from the battle for second between Giovanni Scelzi in the BDS Motorsports No. 1, and the RAMS No. 14k of Kyle Bellm. Taking over the runner-up spot from Giovanni, the driver from Nixa, Mo. would not be alone on the pass as Brian Brown maneuvered his seventh starting Casey’s General Store/FVP No. 21 to third.

Trading the second position a number of times, the pair would not be able to run-down Sam Hafertepe, Jr. even as the No. 15h rolled through traffic. With his margin of victory right at a half straightaway, the silver would be awarded to Brian Brown with Kyle Bellm ending his night third.

Racing back and forth with Seth Bergman in the closing laps, Giovanni Scelzi crossed fourth with Bergman fifth.Brad Loyet rolled forward six positions to sixth with Miles Paulus seventh, after having run in the top-five for much of the first half of the race. Jonathan Cornell was eighth, followed by Wayne Johnson. Earning the CP-Carrillo Hard Charger of the race, Johnny Herrera moved up eight spots to round out the top-ten, and also pocketed $400 from Don Long’s Searsboro Telephone Co.

A field of 23 drivers was on hand at the Missouri State Fair Speedway. Three Heat Races were also sponsored by Don Long’s Searsboro Telephone Co with Giovanni Scelzi, Jonathan Cornell, and Seth Bergman each getting an extra $200 for their Heat Race wins. No B-Feature was contested.

The Lucas Oil ASCS National Tour presented by the MAVTV Motorsports Network is in action again on Thursday, August 24 at Riverside International Speedway in West Memphis, Ark. before heading to Smoky Mountain Speedway in Maryville, Tenn. on Saturday, August 26.

Searsboro Telephone Co. Heat Races (All drivers to the A-Feature)