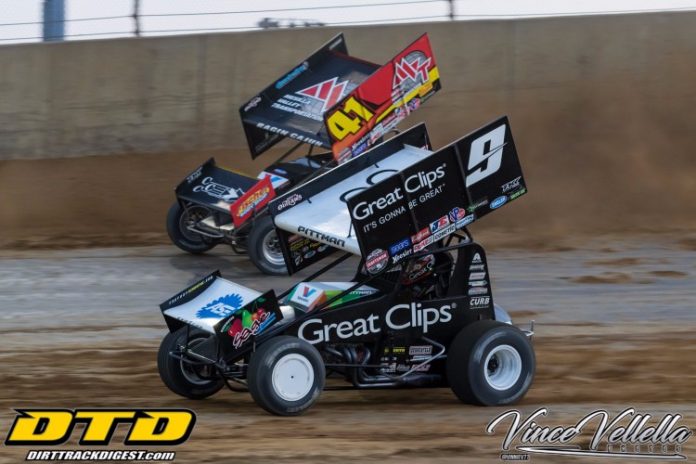 BILLINGS, MT — Daryn Pittman usually has a pretty good memory when it comes to tracks he has raced at the past. He’ll have to be pardoned this time, though, for not remembering a whole lot about BMP Speedway in Billings, Montana. In his defense, it’s been nearly a decade since he has raced at the venue. One thing that Pittman does remember is that he is a past winner at the track. That victory came with the World of Outlaws Craftsman Sprint Car Series in 2005.

Pittman and his fellow World of Outlaws Craftsman Sprint Car Series competitors return to BMP Speedway on Saturday, August 26 for the Big Sky Brawl at Billings.

In five starts at BMP Speedway in his career, the 2013 World of Outlaws Craftsman Sprint Car Series champion has four top-10 finishes, including the aforementioned win. He was ninth in his most recent start at the track in 2008. Pittman also has a pair of top-10 finishes in Billings in the past at Metrapark Speedway.

“I always enjoyed going to Billings,” said Pittman. “I remember the old fairgrounds we used to run the half-mile during the fair. Then, they built the new track outside of town. It’s always a cool city to go to for a few days. I can sort of vaguely remember the race track, but it’s been a while. We’ll definitely have to re-learn it and see if we can’t remember something about it. It’s always good to go back to places you’ve won at before and that gives you a little confidence. It will be pretty much new for everybody and it will be interesting to see how we get around there.”

The Big Sky Brawl at Billings is part of the Western Swing, which will see the World of Outlaws Craftsman Sprint Car Series head to Washington, Oregon and California over the next few weeks. Pittman always has this time of the season circled on his calendar, with the Knoxville Nationals in the books and things beginning to slow down a bit.


“I always enjoy the West Coast Swing and driving out there with the motorhome and taking my family,” Pittman said. “That is some of the most beautiful parts of the country that we don’t get to see very often. It’s definitely a time of the year we look forward to.”

During the heart of the season, Pittman travels the World of Outlaws Craftsman Sprint Car Series circuit with his family in their motorhome. Having his wife, Mandy and daughters Taylor and Kadie along for the ride, helps Pittman stay grounded and is especially beneficial on the tough nights.

“The kids don’t care how you race,” he shared. “They just want to know that you are safe at the end of the night. They don’t understand that the better you run, the more money you make and that’s what makes this whole deal go around. They keep things in perspective and I couldn’t do it without them. It definitely has its challenges, travelling with the whole family on the road, but I wouldn’t trade it for anything.”

Pittman and the Kasey Kahne Racing No. 9 team recently had a “guest crew chief,” as Australian Glenno Inglis, who had worked with Pittman in the past, joined the squad for a few weeks leading up to and including the Knoxville Nationals. The team is currently looking for a full-time crew chief for next season and has KKR General Manager Justin Adams on the road for the remainder of this season. Adams spent a number of years on the road as a crew chief in the past for KKR.

“We have a good, solid crew right now,” stated Pittman. “George (Loux) and Rob (Beattie) have done a great job stepping up and doing more roles than maybe they were supposed to do at this time of the year. We have some improvements to make with our team and hopefully we can do that before the end of the year and give us a boost to hopefully start next season.”

Pittman recently won his first World of Outlaws Craftsman Sprint Car Series race of the season on the opening night of the Ironman 55 weekend at Federated Auto Parts Raceway at I-55 in Pevely, Missouri. For the native of Owasso, Okla., it snapped a 50-plus race winless streak, which stretched back to last October. Prior to the win, Pittman had seven second-place finishes this season as he chased down that elusive first victory of the year.

“It pisses you off running second,” Pittman deadpanned. “You want to win. I don’t think I ever went that long into a season without a win. It’s tough, but it’s tough to win races out here. You can’t take anything for granted, because you never know when your last one will be. They are all difficult. It’s a tough series to win with and we have a great race team and have been close so many times this year and just didn’t get it done. It was good to get that first one and the monkey off our back and hopefully we can get a few more.”

Tickets for the Big Sky Brawl at Billings, featuring the World of Outlaws Craftsman Sprint Car Series at BMP Speedway on Saturday, August 26 can be purchased online at https://slspromotions.ticketforce.com or by phone at 815-344-2023 and at the track on race day.