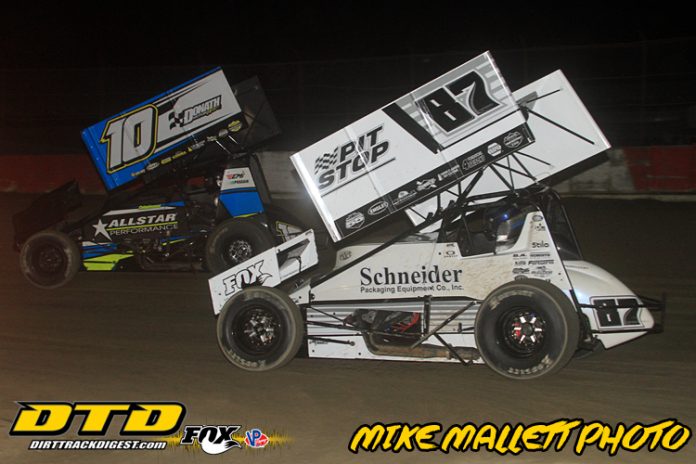 Colagiovanni had a pair of runner-up finishes in 2017 leading into the 1000 Islands RV Canadian Tour/Fondations 4 Saisons Quebec Series event. He just couldn’t seem to get the proverbial monkey off his back as something always seemed to keep him out of Victory Lane. Friday night he made all the right moves in traffic and was good on restarts to keep the field at bay while on his way to the $2,075 win.

“I’ve had a couple podiums this year but it’s good to get the monkey off my back,” said Colagiovanni. “Now people can stop asking why we haven’t had a win yet, why do you keep getting second? It’s been good. This feels amazing.”

Colagiovanni redrew the pole position for the start of the A-Main. He bolted out to the lead with Dale Gosselin in tow for the first couple of circuits before he slowed and stopped in turn four to bring out the caution.


At the green, Colagiovanni again got the jump on the competition with Barney making his presence felt as he moved into second after starting ninth. He was joined by Poirier who had advanced from 11th to fourth at this point. Barney and Poirier battled while Colagiovanni kept up the pace at the front.

Traffic came into play for the first time on lap 10 for Colagiovanni. He made the necessary moves to knife through the slower cars while Barney moved by Poirier for good after the duo swapped the second spot several times up to that point.

Just before halfway, on lap 12, another caution came for Matt Billings as he slowed in turn two with mechanical issues. This set up another restart and another chance for the field to pressure Colagiovanni.

As he was earlier in the race, he got a great run off of four at the green to hold everyone behind him. Barney dove low in turns one and two but he didn’t have enough steam to get up in front of Colagiovanni for the lead. Going forward from here Colagiovanni put some distance between himself and Barney.

Traffic came into play a second time with five laps to go. Before it got too thick another caution was necessary for Shawn Donath as his No. 53 slowed drastically coming down the front straightaway. He needed a push to get back to the pit area.

With another caution came another restart. Barney searched at the green but Colagiovanni was just too good. He held him off over the final few laps to pick up career win number one.

“I was getting a little anxious but I didn’t want to push it because I knew Barney and Poirier were right behind me,” commented Colagiovanni. “I just kept it cool on the start and tried to be as cool as I could and it finally turned out in our favor tonight.”

Barney, the current high point man, finished in the second spot aboard his X-1 Race Cars No. 87. Barney gave it a go but was unable to make a move around Colagiovanni. The Brewerton, N.Y., pilot had nothing for praise for the youngster after his first win.

“The race played out perfectly,” said Barney. “We got to where we needed to be early. We had a good enough race car but Paulie was a little bit better. Hats off to him and his engine. He fired really well on the starts and that put just enough gap between us that I couldn’t do anything with him. He did a heck of a job. This win has been coming for a long time. He’s a talented kid.”

“With all those yellows I tried playing with the car a little bit,” cited Poirier. “I made some adjustments but they were just better. At the end I lost the brakes, lost my tear-offs. I wanted to fight them a little bit more in traffic but I was just hanging at the end. My car was good, but I was surprised they were really good.”

Matt Tanner ran inside the top five for much of the race eventually settling for fourth from his seventh starting position. Paul Kinney made some ground to get from 12th up the final spot in the top five. 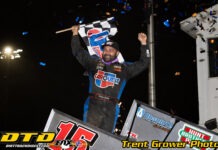 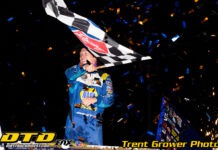