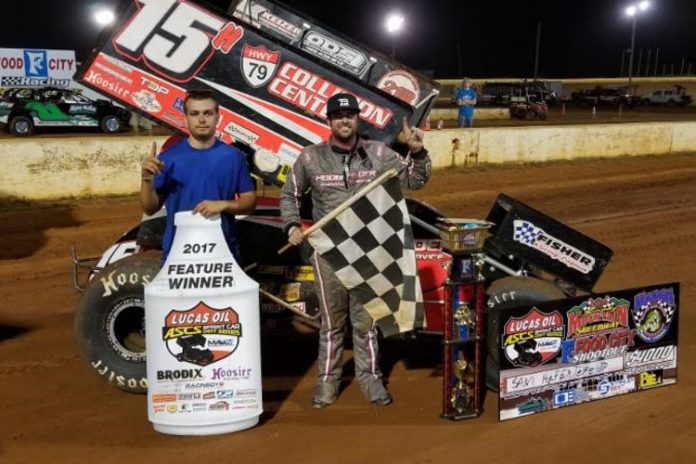 Chasing Wayne Johnson on the start, the Outlaw Wings No. 2c rolled the cushion to open up Saturday’s feature event. Caution on Lap 2 for Michael Miller who slammed the wall in turn-one, Johnson was stopped on the front stretch to swap out the transponder before going green but was able to retain his spot.

Able to hold off the charge of Hafertepe through the first and second turns, it took a couple laps before Johnson was able to build some breathing room. Running down traffic with a half straightaway advantage over the Keith Dobbs Motorsports No. 15H, the slower cars began playing to the advantage of Hafertepe. Closing to Wayne’s tail tank on Lap 12, Sam worked the bottom side of the speedway with the line paying off a lap later.

“Wayne got me on the start, and track position was important. I kept looking at the bottom and I knew it was going to come around, and it came in perfect when we got to those lapped cars that I was able to manipulate the bottom,” commented Hafertepe of the pass for the lead that netted him his 27th career National Tour score. “After we found the right place to run, I don’t think anyone had anything else for us.”

Moving to the lead, Hafertepe quickly built his advantage as Blake Hahn also worked the inside line to take over second. Still contending with slower cars while running third, slower traffic would be the end of Wayne Johnson’s night on Lap 16 as the No. 2c ended up flipping into the wall in the first and second turns. Wayne was unharmed.


With Blake Hahn and Matt Covington now in pursuit on the restart, neither were able to get the run on Hafertepe as Aaron Reutzel came into the mix for the third spot. Trading the spot several times, both drivers were having to contend with failed nose wings, with Aaron able to roll the wing forward to put the car back in balance and gain the advantage on Lap 23.

Going green the remainder of the feature event, Hafertepe found slower traffic in the closing laps. Bringing Hahn from a half straightaway disadvantage to only a hand full of car lengths, time was out for Hahn to get a run as Hafertepe won by 0.914 seconds.

Blake Hahn was joined on the podium by Aaron Reutzel with Johnny Herrera moving forward from ninth to finish fourth, followed by Matt Covington in fifth. Brian Bell was sixth, followed by Skylar Gee from 10th. Harli White, Seth Bergman, and Eric Riggins from 19th made up the top-ten.

A field of 19 was split into three Heat Races with Brian Bell, Wayne Johnson, and Sam Hafertepe, Jr. each earning wins. Wayne Johnson was the FSR Radiator High Point Driver of the Night. Eric Riggins, Jr. was the CP-Carrillo Hard Charger.

The Lucas Oil ASCS National Tour presented by the MAVTV Motorsports Network return to action at the Jackson Motorplex in Jackson, Minn. for Labor Day Weekend on Friday, September 1 and Saturday, September 2.

The Lucas Oil ASCS Southern Outlaw Sprints returns to action on Saturday, August 26, 2017, at Smoky Mountain Speedway with the Lucas Oil ASCS National Tour. For continued updates on the American Sprint Car Series, from the National Tour to any of the seven regional tours that make up the over 150 dates across the ASCS Nation in 2017, log onto http://www.ascsracing.com.

Heat Races (All drivers advance to the A-Feature)