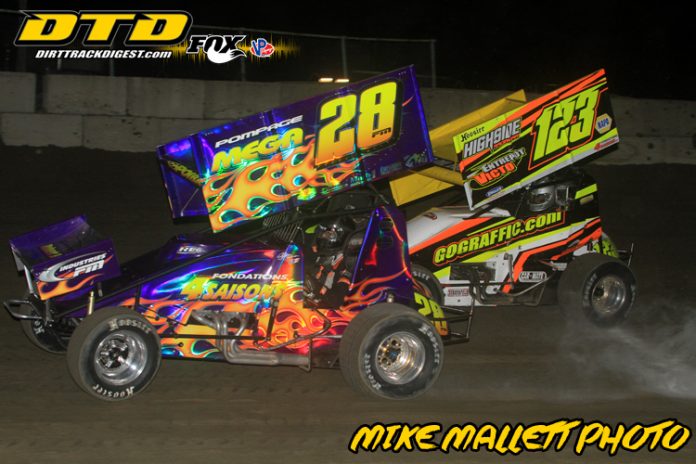 ST.MARCEL-DE-RICHELIUE, QUE– One night after being disappointed with his third place finish at Autodrome Granby, Steve Poirier did what he usually does, he returned to Victory Lane with the Lucas Oil Empire Super Sprints.  The seven-time champion led all 25-laps at Le RPM Speedway to pick up his second series win of the 2017 season.

Poirier, who earned $2,075 for his efforts, blasted the cushion for the entire distance of the main-event as he kept fellow Quebec native Yan Bilodeau behind him.  Jason Barney, the current overall tour point leader, finished in the fourth spot earning himself the 1000 Islands RV Center Canadian championship.

Poirier redrew the pole position which allowed him to secure the lead on the opening lap as he beat Bilodeau to the cushion in turns one and two.  The two raced away as the war raged for the third position between Jeff Cook and Alain Bergeron.

Poirier’s first taste of adversity came on lap six as he encountered the back end of the field.  He continued on the high-side of the speedway which worked for the first few laps in traffic, but it got increasingly more difficult as he put more and more cars down a lap.  Eventually he got to a point where cars were two and three wide in front of him.   He remained patient taking chances when necessary.

“The first couple of lapped cars were on the inside, but then they were side-by-side on the outside,” cited Poirier.  “I was following (Dan) Douville on the outside but I felt like I didn’t have enough room to slide him so I waited a little bit.  I didn’t want to wreck him or wreck myself.  I thought someone would be coming.  That was a portion where I was nervous.”

He got a reprieve on lap 11 as Cook spun in turn two while battling for third.  His spin cleared the way for Poirier but provided the field with an opportunity to give him a challenge.  Poirier was good at the green, refiring on the outside to keep his No. 28FM at the front.

As was the case earlier in the feature, Poirier closed on the back of the field another time.  On this occasion, Poirier’s path on the top wasn’t impeded allowing him to put several cars between himself and the rest of the competition.  He led the way with Bilodeau, Barney and the previous night’s winner Paulie Colagiovanni waged a race for second and third.

“The outside was my preferred line,” he said.  “I tried the inside but I felt like I wasn’t good enough to pass a car there.”

Poirier picked up career win No. 65 as Bilodeau won the tussle for second for his best finish of the 2017 season.  Bilodeau got a lucky break with the first caution as he had lost second to Barney, but the caution negated the pass.  He didn’t make the same mistakes after the restart to finish second.

“Steve was fast and we were just following him,” stated Bilodeau.  “I tried to keep running my line and not get passed.  When Jason passed me I was like, no, but the caution saved me.  After that I tried to stay on the top and keep my position in second.”

Colagiovanni blasted around Barney on the top of turns three and four with two laps to go in order to get the third spot.  He did so without the use of the rear brakes as he lost the caliper midway through the A-Main.

“I looked at the scoreboard on lap 16 and as I went into the first turn I had no brakes,” said Colagiovanni.  “I didn’t want to pull off, I was in a good spot, but I didn’t want to wreck anything.  I didn’t push it or anything.  I ended up third passing Barney at the end.  It was a great night.”

“Canada has been good to us all year,” mentioned Barney.  “We’ve been consistent up here.  I’m a little disappointed withtonight.  I thought we had a good shot but the caution didn’t fall right the way.  It’s been a good season, a great year so far.  I’m ready to get home and prepare for a four day weekend next week.”

Paul Kinney finished in the fifth spot for the second consecutive night.