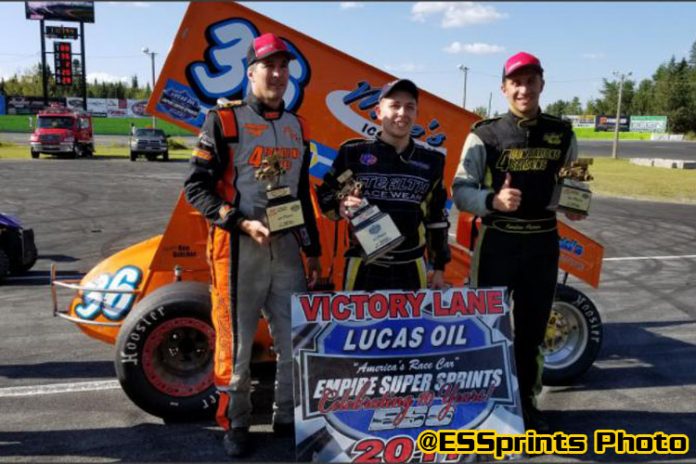 VALLIE JONCTION, QUE – Since Brockville, Ontario’s Matt Billings has taken over the driving duties of the Mike Stelter owned #36 he has been knocking on the door in claiming his first ever victory in a winged sprint car on the Lucas Oil Empire Super Sprint Tour. The ice was broken Sunday night on the asphalt at Autodrome Chaudiere where Billings did a wild outside pass of Steve Poirier to win the one of a kind event in Quebec.

The win for Billings was worth $3,302 but more importantly was a big weight lifted wondering when that first checkered flag was going to come. Albeit it was on a different surface, but the event in front of a big crowd was one to remember.

“Finally!, We got one. We have been so close hoping for a win and everything was just right today,” Billings said with a smile, “Mike just gave me a perfect car, he has driven a sprint car on asphalt and knew what to do with the set up.”

ESS’ all-time winningest driver Steve Poirier drew the pole for the 25 lap affair with Billings getting the worse draw of fourth. However, after his heat he knew he had a chance.

“The car was fast, I needed to make a pass to get into the redraw, we did that on the outside and actually looked like we were closing in on Steve there near the checkered,” he continued, “Mike knew what to do, told me how to drive to keep the tires under me so I had a good car at the end.”


When starter Eric Pivin dropped the green flag, Poirier got the jump but as the cars came down the backstretch Billings already has Stelter’s Mach 1 chassis in second place. Then he went to the same lane he did in the heat to try to make the outside pass.

“I could roll through the corners on the top and also keep the car pretty strait, that was key,” Billings mentioned on his plan, “You have to try the top to pass and I think we caught him (Poirier) a little bit. The lane was there and we were fortunate to get the pass and then the win. Now, we just need to get back to work and get one on the dirt!”

For Poirier, as it was for many, his first time on asphalt as well and as laps went on you can see he was getting more and more comfortable. While his car wasn’t quite as good as Billings, he was never really challenged for the runner-up position that paid $2,268.

“My car was just a little bit tight going in and then a little loose coming off,” said the seven-time champion, “When Matt got by me I tried a little harder but my car would just get sideways so I just tried to settle down and stay smooth.”

Poirier went on, “I didn’t think I would try these cars on asphalt but with the show in Quebec and they really paid good money too we decided to get a car prepared for the show. We still have a bunch to learn but it was really fun. We will take some notes and definitely try it again.”

What made the afternoon for the Poirier team even more sweeter was Jordan Poirier taking the final podium position when it first the team was possibly looking just to start the event as he badly wrecked his primary car the night before at RPM.

The team hastily got Steve’s primary dirt car changed over in the wee hours and then Jordan (who has laps at Chaudiere in a SpeedSTR) found a comfort zone of his own to take third and $1,702.

Rounding out the top five were Dave Axton and Yan Bilodeau. The $100 to win Fondations 55 heats were won by Scott Holcomb and Steve Poirier. The 25 lap A-Main went from green to checkers with all starters finishing the event.