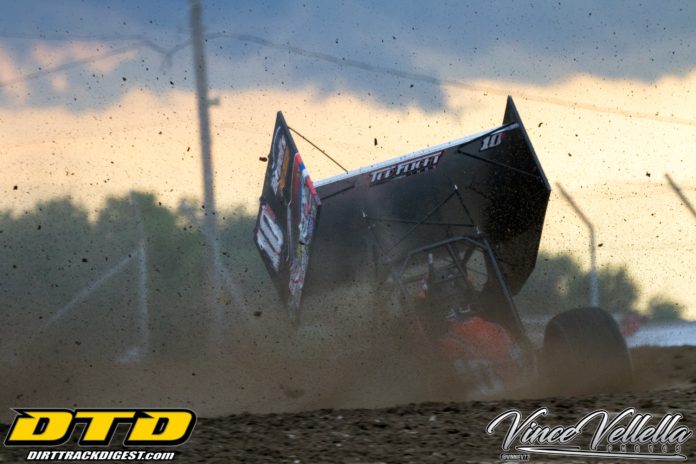 INDIANAPOLIS, IN – With the 2017 Open Wheel Championships at Atomic Speedway officially in the books, the Arctic Cat All Star Circuit of Champions will now shift further north in the Buckeye State, reestablishing their focus on a pair of events at Attica Raceway Park and Wayne County Speedway during Labor Day weekend. Each of the upcoming programs will award $10,000 top prizes, as well as full points toward the 2017 Arctic Cat All Star championship which will be settled officially in mid-October.

The Labor Day weekend doubleheader will kick off on Saturday evening, September 2, with a visit to Attica Raceway Park in Attica, Ohio. “America’s Series” will join the best in the Buckeye State for the annual Dirt Classic Ohio; a 40-lap, $10,000-to-win, $600-to-start marquee that will utilize passing points and double heat races to assemble the evening’s starting lineup. Sheldon Haudenschild is the defending Dirt Classic Ohio winner, holding off a pair of Ohio legends, Byron Reed and Dale Blaney, for the $10,000 paycheck.

In addition, Attica Raceway Park will also host the Ohio Sprint Speedweek presented by Cometic Gasket make-up feature that was postponed from Friday, June 16; the result of a late evening rain shower. The lineup has already been set with Travis Philo and Cale Conley on the front row. Scheduled to open the evening at Attica Raceway Park, those in action will compete for a $5,000 top prize.

“I’m excited for all of those who decide to come out and join us on Saturday. This is a great deal for our fans,” said Rex LeJeune, Director of Operations at Attica Raceway Park. “Not only do our fans get to witness the 35-lap, Ohio Sprint Speedweek make-up feature, but they also get to watch the Dirt Classic Ohio from start to finish. The unique format will keep people on edge all night long. Some of the biggest names in sprint car racing are committed. We are all very excited.”

Once their visit to Attica Raceway Park is complete, the Arctic Cat All Stars will trek southeast and invade Wayne County Speedway in Orrville on Sunday, September 3, for the Pete Jacobs Memorial. Similar to the Dirt Classic Ohio, the 2017 Pete Jacobs Memorial will award $10,000-to-win, $600-to-start, but will utilize a standard, Arctic Cat All Star Circuit of Champions format that will feature qualifying time trials, heat race action, one or two dashes, and respective mains.


As an added bonus for racers and fans, Wayne County Speedway will also host an Australian Pursuit during the Pete Jacobs Memorial program and will feature the top-ten overall fastest qualifiers, if they choose to participate. Drivers entered will start single-file and will race for ten laps. If a driver gets passed by another competitor, he or she is then out of the event. The driver leading the event after ten laps will be declared the winner and will be awarded $600. The Australian Pursuit will have no impact on the Arctic Cat All Star program.

“We have a great program lined up for our fans,” Kristin Flory said, Co-Promoter of Wayne County Speedway. “The best in the business will be with us on Sunday and I’m sure it will top last year’s event. We are also excited to announce the Australian Pursuit. It won’t have any direct connection to the All Star program, but it will serve as an extra opportunity for drivers to earn some bonus money, as well as give our fans a unique race to witness.”

Alvada, Ohio’s Chad Kemenah will lead the Arctic Cat All Star Circuit of Champions into action on Saturday night at Attica Raceway Park. The five-time and defending Arctic Cat All Star champion owns three victories on the season, as well as a 372-point cushion in the current championship standings. Kemenah’s 2017 campaign includes an impressive 29 top-ten finishes in 36 main event starts, 21 of his finishes within the top-five.

Attica Raceway Park in Attica, Ohio, will open gates at 3:00pm on Saturday, September 2. Racing is scheduled to hit center stage at 7:00pm, sharp. Those seeking more information should visit Attica Raceway Park live on the Web at www.atticaracewaypark.com.

Wayne County Speedway in Orrville, Ohio, will open gates at 2:00pm on Sunday, September 3. Hot laps will hit the racing surface at 6:00pm, with racing to follow at 7:30pm. Those seeking additional news and notes should visit “Orrville’s Historic Oval” live on the Web at www.waynecountyspeedway.com. Monday, September 4, will act as the rain date.