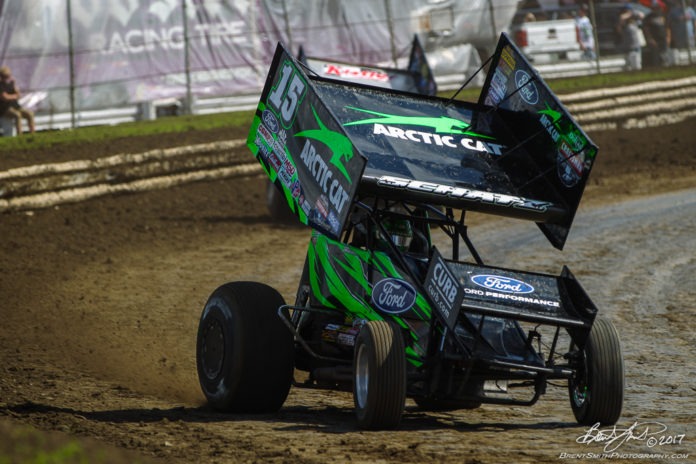 CONCORD, NC  – The World of Outlaws Craftsman® Sprint Car Series will make their only stop in the Beaver State on Wednesday, Sept. 6at the Willamette Speedway in Lebanon, OR. The mid-week show will mark the fifth time “The Greatest Show on Dirt” will race at the 3/10-mile high-banked oval.
Last year, eight-time and defending World of Outlaws Craftsman Sprint Car Series Champion Donny Schatz took the trip down Victory Lane.
Coming off his tenth 5-Hour ENERGY Knoxville Nationals victory, Schatz is on a familiar tear, having racked up 17 victories, putting the Tony Stewart Racing No. 15 Arctic Cat car in prime position to grab a ninth championship. Schatz currently sits 94 points ahead of second-place Brad Sweet and 174 points ahead of third-place David Gravel.
Schatz isn’t the only driver having a stellar season, however. Watertown, Connecticut’s David Gravel has raised the bar on his personal record for most wins in a season from nine to 13 and counting.
Kasey Kahne Racing’s Justin Adams recently joined the No. 9 Great Clips team on the road is now calling the shots for Outlaw Daryn Pittman. The Owasso, OK native seems to have found his groove as of late. Pittman picked up his second victory of the season last weekend at BMP Speedway, along with four top-five finishes over the course of the last five races, moving him into fourth place in the championship point standings.
When the 16 full-time World of Outlaws Craftsman Sprint Car drivers Outlaws roll into town, they will be joined by 2016 Grand Annual Sprint Car Classic Champion Australian Jamie Veal, as well as 2017 5-Hour ENERGY Knoxville Nationals Rookie of the Year Dominic Scelzi. Additionally, a handful of regional teams are expected to compete with the best in the business as well.
Willamette serves as the mid-point of the World of Outlaws Craftsman Sprint Car Series Fall West Coast Swing, with the Series heading South to compete in the Golden State for a pair of weekends at Silver Dollar Speedway in Chico, CA on Sept. 8 and 9 and the following weekend at Calistoga Speedway on Sept. 15 and 16.

Be sure to catch the World of Outlaws Craftsman Sprint Car Series up and down the West Coast. Visit WoOSprint.com For information on the Outlaw event at Willamette. For tickets, visit Willamette Speedway’s website.