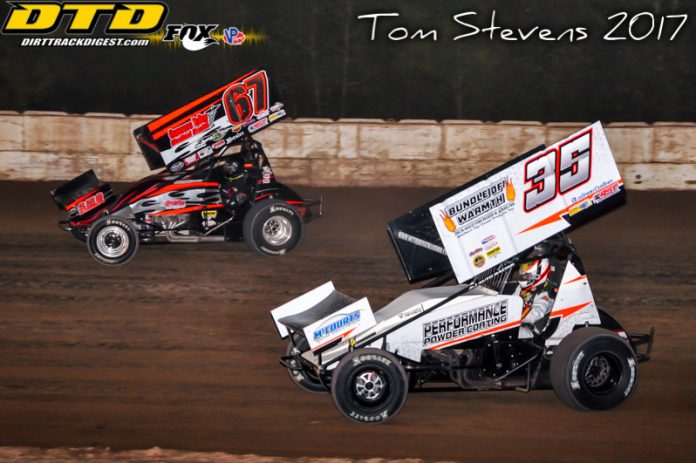 MECHANICSBURG, PA – Three point races remain for the A-Verdi Storage Containers Patriot Sprint Tour American Series Championship and it goes through Central Pennsylvania this weekend as the tour visits Williams Grove Speedway on Friday September 1, and a return visit to Selinsgrove Speedway on Saturday, September 2. The Path Valley event set for September 3 has been re-scheduled to Sunday, September 17 but will be a United Racing Club sanctioned show only.

Dr. Steve Collins has continued to operate on Jared Zimbardi’s season long point lead. After another podium finish for the 67 team this past Saturday at Mercer, he now only trails Zimbardi by 22 points heading into this weekend. Kyle Drum is on the outside looking in trailing Zimbardi by 78 and Collins for second by 56 markers making it a three way battle for the championship.

Along with Zimbardi, Collins, and Drum, many other PST competitors will be making the trip including Jordan Thomas, Derek Jonathan, Josh Azzi, Joe Trenca, Derrick Juliano, George Suprick, and Chuck Hebing.

This will be the first full point event ever held at the historic Williams Grove Speedway for the Patriots but they held a co-sanction show with URC back in 2011 when Mark Smith was the winner.

Friday’s show is the second challenge event with the United Racing Club this season as the first one came just two weeks ago when teenage driver, Jordan Thomas, won his first ever Patriot Sprint Tour win at the Orange County Fair Speedway.


Saturday’s show at Selinsgrove Speedway will also be co-sanctioned but will be the second time in 2017 the Patriots visit the fast half mile. Nate Snyder held off Jason Schultz and Davie Franek for the win in a thrilling 25 lap Joe Whitcomb Memorial back in June.