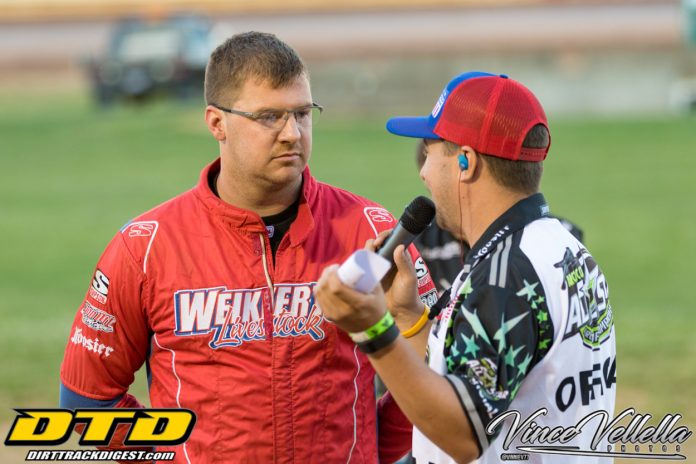 INDIANAPOLIS, IN – One final trip to the Keystone State stands ahead for Tony Stewart’s Arctic Cat All Star Circuit of Champions. Comprised of two events at two different facilities, the final Central Pennsylvania invasion of the season will include visits to Selinsgrove Speedway and Bedford Fairgrounds Speedway on Saturday and Sunday, September 16-17. The traveling band of winged warriors will race for a total winner’s share equaling $13,000 during the two-day trek, $8,000 of it during Selinsgrove Speedway’s season ending Jim Nace Memorial/National Open on Saturday.

Including their first visit in 1970, the Arctic Cat All Star Circuit of Champions have made 15 prior appearances at Selinsgrove Speedway, each resulting in a different main event winner. Danny Dietrich, a two-time winner with the Series this season, is the most recent to visit Selinsgrove Speedway victory lane during Arctic Cat All Star competition, earning high honors on April 24, 2016.

Moving closer and closer toward a record-tying sixth Series championship, Alvada, Ohio’s Chad Kemenah will lead the Arctic Cat All Star charge into Central Pennsylvania. The three-time winner in 2017, one of which at Bedford Fairgrounds Speedway during the Series’ first visit in late April, holds a 350-point cushion over Kunkletown, Pennsylvania’s Ryan Smith. Smith, who owns one Arctic Cat All Star victory during competition in 2017, will enter the two-race stand in hopes to furthering his Central Pennsylvania momentum streak. Most recently, the “Kunkletown Kid” finished second during the 50th Annual Tuscarora 50 at Port Royal Speedway.


Selinsgrove Speedway officials will open pit gates at 4:00pm on Saturday, September 16. A mandatory meeting for all Arctic Cat All Star competitors will be hosted at 5:45pm, followed by hot laps at 6:30pm, sharp. Those seeking extra news and notes can find Selinsgrove Speedway live on the Web at www.selinsgrovespeedway.com.

Bedford Fairgrounds Speedway officials will allow pit access beginning at 4:00pm on Sunday, September 17. The mandatory drivers meeting will take shape at 5:30pm, followed by hot laps at 6:00pm. More information can be found on the Web at www.bedfordspeedway.com.