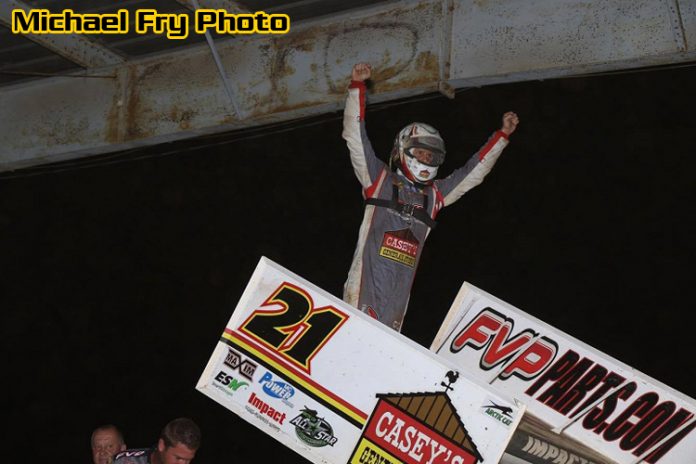 BEDFORD, PA – Completing a weekend sweep against the Arctic Cat All Star Circuit of Champions, “Blackjack” Brian Brown led all 30 circuits on Sunday night at Bedford Fairgrounds Speedway, earning another $5,000 in the process to cap off a $13,000 weekend in Central Pennsylvania. It was Brown’s first-ever visit to the Bedford County half-mile, ultimately leading Findlay, Ohio’s Caleb Helms and Aussie invader, James McFadden, to the final checkers.

Brian Brown is now the sixth different Arctic Cat All Star winner at Bedford Fairgrounds Speedway in six Series appearances; a statistic carried over from Selinsgrove Speedway when Brown became the 16th different winner one night ago.

“Hats off to my crew, everybody on this FVP/Casey’s General Stores/Impact team. To come out here to Central PA and win two in a row is a dream come true,” Brian Brown explained. “We thought if we could come out here and get a couple top-fives, that would be a successful trip. I never would have dreamed I’d come to Bedford my first time and win. They call it ‘motorsports’ for a reason and we have the best engine builder in the country.”

Brian Brown and Caleb Helms led the feature grid to green on Sunday night. Brown earned the initial jump, holding back Helms and Trey Starks as the field passed by the flag stand for the first time.

Utilizing the top of the speedway in turns one and two, as well as the bottom groove in turns three and four, Brown cruised at the top of the running order undisturbed until caution flags flew for the first time on lap 11. Trey Starks, who was racing for second at the time, was responsible for the caution, slowing as the leaders crossed the line to complete lap 10; Starks would not return.


Green flag conditions soon resumed with Brown returning to his familiar lines in all four corners. By the mid-point of the 30-lapper, Helms was beginning to pressure Brown for the lead, racing within two to three car lengths, even while in traffic, until caution flags flew again on lap 22. The Findlay, Ohio, native was working the top groove all the way around the legendary half-mile, making up the most ground on Brian Brown at the exit of turn four.

Including the pause on lap 22, a total of three cautions between laps 22 and 25 interrupted Brown’s campaign at the front of the field, each giving Helms another chance to work around the former Knoxville (IA) Raceway track champion. Despite Helms’ efforts, the restart on lap 25 proved to be all that Brown needed, slowly pulling away as each lap clicked complete.

“We’ve been getting lucky. The pill draws have been going our way. To say I could have won from tenth tonight would have been pretty tough,” said Brian Brown. “Sometimes it’s better to be lucky than good, and we’ll take the luck. We’ve been getting a lot of front row draws. When you get that opportunity, you have to take advantage of it. There have been some races the last month or so that I’ve given away as a driver. I’m just tickled to be here.”

With the final Pennsylvania appearance officially in the books, Tony Stewart’s Arctic Cat All Star Circuit of Champions will turn west and hop the Pennsylvania/Ohio border, anxious to battle in the Buckeye State for the final four dates on the 2017 campaign trail. Eldora Speedway in Rossburg, Ohio, will host “America’s Series” on two occasions during the final four stops including a visit on Saturday, September 23, for the 36th Annual Four Crown Nationals.

Joining all three national USAC divisions, the Arctic Cat All Star Circuit of Champions will compete for $5,000 during the Four Crown Nationals showstopper; a program that welcomed 37 entries in 2016. Ian Madsen earned high honors a year ago, holding back Chad Kemenah and Randy Hannagan at the finish.

Those seeking additional news and notes regarding the Four Crown Nationals should visit Eldora Speedway live on the Web at www.eldoraspeedway.com.