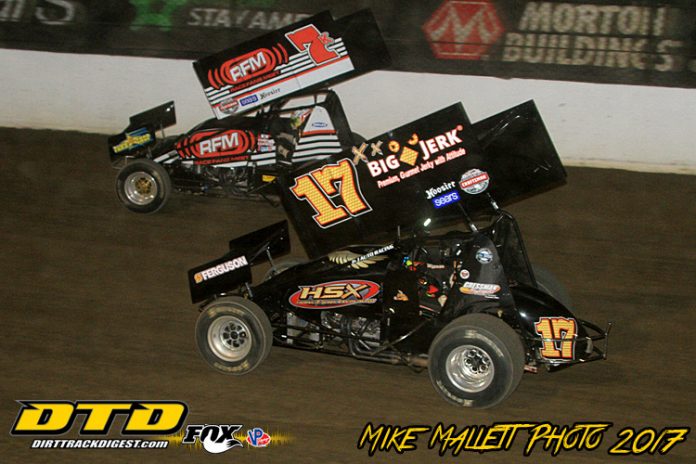 INDIANAPOLIS, IN – The Arctic Cat All Star Circuit of Champions have officially hit the homestretch. Only four dates remain on the 2017 Arctic Cat All Star schedule, and despite the end in sight, the pursuit toward a championship continues. Alvada, Ohio’s Chad Kemenah, a three-time winner during All Star competition in 2017, will enter the final stretch of season on top of the title chase. The five-time and defending titlist is seeking a record-tying sixth Series championship, equaling the number accomplished by the “Lowrider” Dale Blaney.

In addition to being fourth in the current driver standings, Elida, Ohio’s “Mad Max” Stambaugh is on pace to become the 2017 Arctic Cat All Star Circuit of Champions Rookie of the Year.

“We’ve been having a lot of fun this year. It’s tough to believe we are down to just a few races,” Max Stambaugh explained, driver of the familiar Ray Marshall Motorsports/Buckeye Machine Fabricators/No. 33M. “Being a rookie is tough. It’s not easy out here, especially while maintaining a full-time job. I can’t thank Ray Marshall and everyone enough for this opportunity. Our goal is to go out and perform well during the last few races and seal up the rookie title. That was our goal from the start. We are almost there.”

The World’s Greatest Dirt Track – Eldora Speedway in Rossburg, Ohio – will host the Arctic Cat All Star Circuit of Champions on two, separate occasions during their last bit of the 2017 season, the first on Saturday, September 23, during the 36th Annual Four Crown Nationals presented by NKT.TV. In addition to a full, Arctic Cat All Star Circuit of Champions program, complete with one-lap qualifying, heat race competition, one dash, and respective mains, all three national USAC divisions, Midget, Sprint Car and Silver Crown, will be on hand to complete the “Four Crown Showdown.”


The Arctic Cat All Star Circuit of Champions made their most recent Eldora Speedway appearance on Saturday, June 17, during Ohio Sprint Speedweek presented by Cometic Gasket. The “Steel City Outlaw” Tim Shaffer earned the $5,000 payday, holding back a hard charging Rico Abreu, as well as Ohio standout, Travis Philo, to claim the 30-lap showstopper.

Continuing a rich tradition, the 36th Annual Four Crown Nationals will be the 144th Eldora Speedway appearance by the Arctic Cat All Stars in Series history.

Eldora Speedway officials will open gates at 12-noon on Saturday, September 23. Hot laps are scheduled to begin at 4:45pm, followed by racing at 8:00pm. Those seeking additional news and notes should visit Eldora Speedway live on the Web at www.eldoraspeedway.com.