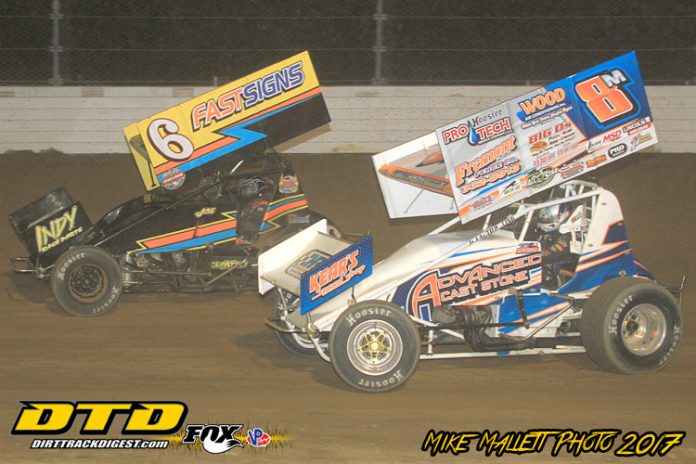 INDIANAPOLIS, IN – Concluding a nine month campaign consisting of nearly 50 events stretching from Upstate New York to eastern Iowa, as well as sunny, northern Florida, the Arctic Cat All Star Circuit of Champions will make their final appearances of the season this Friday and Saturday, October 13-14, ready to challenge local and regional combatants at a pair of state-of-the-art facilities on opposite ends of the Buckeye State. Arctic Cat All Star teams battling for positions in the season championship will have three opportunities to advance during the course of the weekend, as three main events will be contested over the two day swing.

Mansfield Motor Speedway in Mansfield, Ohio, will activate the final weekend of competition for the Arctic Cat All Star Circuit of Champions. Hosting two main events in one evening, “Double Down at Mansfield Motor Speedway” will feature a full show for “America’s Series,” as well as a make-up feature that will also award a $5,000 top prize. The make-up feature, scheduled to be completed just before heat race action takes shape for the regularly scheduled program, was originally planned to conclude the All Star visit in late May, but Mother Nature halted any hope for that just as feature cars were beginning to stage.

Earning a record-tying sixth Series championship, Chad Kemenah will officially be crowned as the 2017 Arctic Cat All Star Circuit of Champions champion on Saturday night at Eldora Speedway. Entering the weekend with a commanding 462-point lead in the Arctic Cat All Star driver championship, Kemenah’s title will be a second consecutive, padded by three victories on the season thus far, as well as 34 top-ten finishes in 45 main event starts.


The “Kunkletown Kid” Ryan Smith; New Castle, Indiana’s Caleb Armstrong; leading Rookie of the Year contender, “Mad Max” Stambaugh; and Findlay, Ohio’s Caleb Helms will enter the upcoming weekend second through fifth in the Arctic Cat All Star driver standings. Smith and Helms each own one victory on the season.

Mansfield Motor Speedway in Mansfield, Ohio, will open pit gates at 4:00pm on Friday, October 13. A mandatory drivers meeting will be conducted at 5:00pm, followed by motor heat at 5:20pm and Arctic Cat All Star hot laps at 5:45pm. Those seeking additional news and notes should visit Mansfield Motor Speedway live on the Web at www.mansfieldmotorspeedway.com.

Eldora Speedway in Rossburg, Ohio, will open gates at 1:00pm on Saturday, October 14. A mandatory meeting for all full-time teams and staff will be conducted at 3:00pm, followed by a mandatory drivers meeting for all of those entered for action at 3:50pm. Arctic Cat All Star Circuit of Champions hot laps will hit the historic half-mile at 4:30pm. Those seeking additional information should visit Eldora Speedway live on the Web at www.eldoraspeedway.com.

About Arctic Cat:For more than 50 years, the Arctic Cat snowmobile brand has stood as one of the most widely recognized and respected in the industry. Today Arctic Cat’s snowmobile product lines span more than 50 different models, with offerings for every style of riding, from trail-riding with the family, to long-distance touring with friends, to mountain sleds to handle the most severe backcountry conditions. For more information, visit: www.arcticcat.com.

About Textron Inc:Textron Inc. is a multi-industry company that leverages its global network of aircraft, defense, industrial and finance businesses to provide customers with innovative solutions and services. Textron is known around the world for its powerful brands such as Bell Helicopter, Cessna, Beechcraft, Hawker, Jacobsen, Kautex, Lycoming, E-Z-GO, Greenlee, Textron Off Road, Arctic Cat, Textron Systems, and TRU Simulation + Training. For more information, visit:www.textron.com.