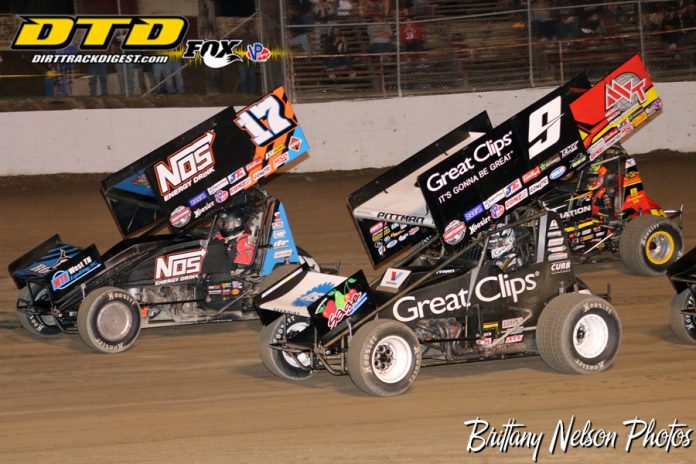 SALINA, OK — The World of Outlaws Craftsman Sprint Car Series visits Salina Highbanks Speedway in Salina, Oklahoma for the Twister Showdown on Saturday, October 21. The event will mark the fifth straight year and sixth time overall that the series has competed at the high-banked three-eighths-mile, located just outside of Tulsa. The Twister Showdown will be the only stop this season for the Outlaws in the state of Oklahoma.

Daryn Pittman, who hails from nearby Owasso, Okla., was victorious last year at Salina Highbanks Speedway. The win for Pittman was his first in his home state with the World of Outlaws Craftsman Sprint Car Series and it also snapped a three-month winless drought that had stretched to 25 races. He led every lap, but on a late restart with two-to-go, David Gravel shot to the lead coming off turn two, before Pittman moved back out front on the exit of turn four as the pair came to the white flag.

The win was the second straight for an Oklahoma native at Salina, as Shane Stewart, who grew up in Bixby, was victorious in 2015 at the track. Pittman is the only driver who has finished in the top-10 in all five of the previous World of Outlaws Craftsman Sprint Car Series events at the ultra-high-banked oval.

Salina Highbanks Speedway is one of the few tracks on the schedule that eight-time and defending series champion Donny Schatz has not won at. The North Dakota native has four top-10 finishes in five starts at the track, including a runner-up performance in the inaugural World of Outlaws Craftsman Sprint Car Series event at Salina in 2011.

Brad Sweet has three top-10 finishes in four starts at Salina, including a runner-up performance in 2015, which saw him lead five laps. The California native is currently second in points and has five wins on the season.


David Gravel, who is having a career-year this season and is up to 17 A-Feature wins, has been very consistent at Salina Highbanks Speedway, recording four top-10 finishes in the same number of starts. Gravel nearly stole the win from Pittman last year in a frenetic green-white-checker finish.

Also in action in the Twister Showdown on Saturday, October 21 will be veteran drivers Jason Johnson, Kraig Kinser and Jason Sides, as well as up-and-comers Logan Schuchart and Jacob Allen from Pennsylvania. Greg Wilson and Clyde Knipp each made their first visit to Salina Highbanks Speedway last year.

Four drivers will be making their first-ever trip to the track, led by the father/son duo of Jac and Sheldon Haudenschild. J. Haudenschild has raced numerous times in his Hall of Fame career in the state of Oklahoma, mainly at the old half-mile in Oklahoma City. S. Haudenschild is the leading contender for the Kevin Gobrecht Rookie of the Year Award this season. Brent Marks from Pennsylvania is also battling for the rookie crown. Parker Price-Miller, who took over the reins of the No. 4 machine for Destiny Motorsports last month, will be seeing Salina Highbanks Speedway for the first time as well.

A strong contingent of “invaders” are expected to challenge the World of Outlaws Craftsman Sprint Car Series at Salina Highbanks Speedway, including Brady Bacon, who hails from nearby Broken Arrow. The Madsen brother, Kerry and Ian, are also expected to be in attendance, as well as fellow Knoxville Raceway competitor R.J. Johnson.

Tickets for the Twister Showdown, featuring the World of Outlaws Sprint Car Series at Salina Highbanks Speedway on Saturday, October 21 can be purchased online at slspromotions.ticketforce.com or by phone at 815-344-2023 and at the track on race day.