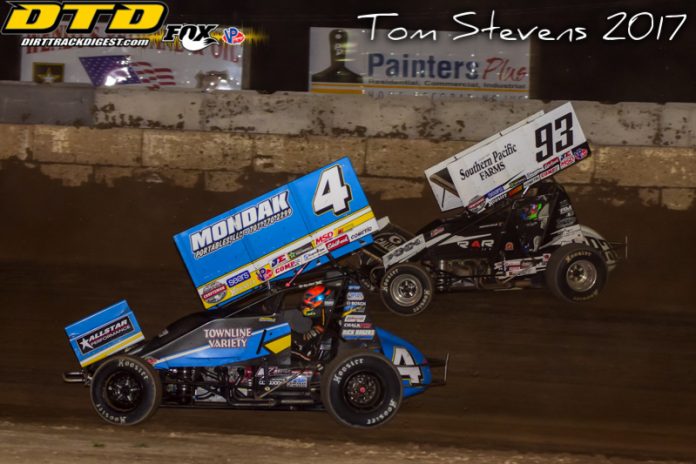 KANSAS CITY, KA – Seeing race tracks for the first time and quickly adapting to them is a valuable trait that Parker Price-Miller has acquired and honed during his young racing career. The 19-year-old has visited numerous tracks for the first time over the last few seasons and will add another to that list on Friday, October 20, when the World of Outlaws Craftsman Sprint Car Series invades the historic Lakeside Speedway in Kansas City, Kansas for the FVP Platinum Battery Shootout.

The race at Lakeside Speedway will be part of a stretch of six race tracks in a seven-track span that the native of Kokomo, Ind., will be making his debut at. Thanks to the marvels of modern technology, Price-Miller is usually able watch videos online of tracks to get an idea of the shape and even the complexion of the track surface.

“Sometimes you go to tracks like Eldora and Williams Grove where there are millions of videos you can watch and then you go to a track, such as Lakeside, that only has one Outlaws race a year, so it’s kind of hard to find videos,” Price-Miller said. “I think with how I race, I normally don’t go to the same track two weeks in a row. I am always going to new places and I think I adapt well. It’s going to be tough with the Outlaws, though, because those guys are the best of the best and most of them have been there before and I haven’t. So, that’s a disadvantage, but everyone has had to go through it. I’m looking forward to the challenge.”

Price-Miller, who had been running a “True Outlaw” schedule this season, was named the driver of the No. 4 Destiny Motorsports car on the World of Outlaws Craftsman Sprint Car Series circuit last month, after Paul McMahan decided to step out of the driver’s seat. Price-Miller, who was the 2016 MOWA Series champion, made his first start for the team on September 22 at the famed Eldora Speedway in Ohio.

“I’ve always wanted to be an Outlaws driver and I am thankful for the opportunity,” he noted. “It’s tough, though. It’s fun, but it’s not easy how everyone says it is. It’s a lot of work and wears you out. Balancing everything is one of the biggest challenges and one of the most important keys to being successful out here as well.”


After stepping out of the driving role at Destiny Motorsports, McMahan elected to remain on-board as the Team Manager as well as serving as a mentor to Price-Miller. Having been around the sport for over 30 years, with many of those years spent on the road full-time with the World of Outlaws Craftsman Sprint Car Series, where he has 26 career wins, McMahan brings plenty of hands-on experience and knowledge to his new role, which should greatly benefit Price-Miller, who is still just a teenager.

“He’s done and seen it all before,” explained Price-Miller of McMahan. “If I have a question about a track or even just a question about life itself, he’s been there and done that. It’s nice to have someone there to talk to. I can ask my Dad, but he’s never raced sprint cars. There are questions that he really can’t answer, but Paul can.”

Price-Miller won his first career World of Outlaws Craftsman Sprint Car Series race earlier this season at Tri-State Speedway in his home state of Indiana. The young driver was running second just before the halfway point of the race, when the leader tangled with a lapped car, moving him to the top spot. Price-Miller then had to hold off David Gravel down the stretch to win the 40-lapper.

“I don’t think there will ever be another night like that,” he said. “If I won the Knoxville Nationals or Kings Royal, it may be a better night than that. On that night, I won my first World of Outlaws race and people dream of wining an Outlaws race. To win it in my home state, with two of my best friends was amazing. I was only 18. My crew chief (Levi Curry) was 20 and my other crew guy (Brayden McMahan) was 22. We were really young and three best friends going out and racing every weekend. To go out and beat the Outlaws like that was pretty cool and meant a lot to all of us.”

Being the youngest full-time driver with the World of Outlaws Craftsman Sprint Car Series, Price-Miller is cognizant of the fact that a few of the drivers he competes against night and in night out having been racing longer than he has been alive. He also views each trip to the race track as a learning experience.

“It’s hard not to be intimidated sometimes,” said Price-Miller. “They don’t care who you are and that’s how I kind of have to be. I respect them, but I have to go out there and not care who they are and just think that I am racing the same guys and they are trying to do the same thing as me and that’s win races. I feel like if I wasn’t good enough, I wouldn’t have had this opportunity.

“I get along with a lot of the Outlaws guys and we are good friends. I just have to treat it as another race against another racer and try not to be too intimidated and try not to let them bull me around, but I’m sure they do, because I’m inexperienced. The restarts are a lot harder. At a local race, it’s not cutthroat like the Outlaws are and every position at an Outlaws race is more money and that’s how they make their living. They are more aggressive on restarts and just racing in general. I have to get a lot more aggressive on that aspect of racing.”

With just six races remaining on the 2017 World of Outlaws Craftsman Sprint Car Series schedule, Price-Miller and the Destiny Motorsports team are in full “test mode” for next year. Getting seat time, laps and being able to build chemistry for next season is the ultimate goal. With only a few months from the end of the 2017 season until the beginning of the 2018 campaign, any head-start that can be gained is certainly beneficial.

“We had talked about the plan for a while,” shared Price-Miller of him joining Destiny Motorsports. “They were struggling with some stuff and wanted me to come out and get some laps for next year. That’s why we did it during the season, switching over to the (No.) 4 car. We have been going to some tough tracks. We were at the Grove a few weeks ago and Eldora before that. There are a lot of tough tracks with good competition, so we wanted to get that part of it out of the way, so that we can go into those tracks with some experience and laps next year.”

Tickets for the FVP Platinum Battery Shootout, featuring the World of Outlaws Craftsman Sprint Car Series at Lakeside Speedway in Kansas City, Kansas on Friday, October 20 and can be purchased online at slspromotions.ticketforce.com or by calling SLS Promotions at 815-344-2023 and at the track on race day. Reserved tickets for Sections B and D, can be purchased by calling the track office at (913)-299-9206.