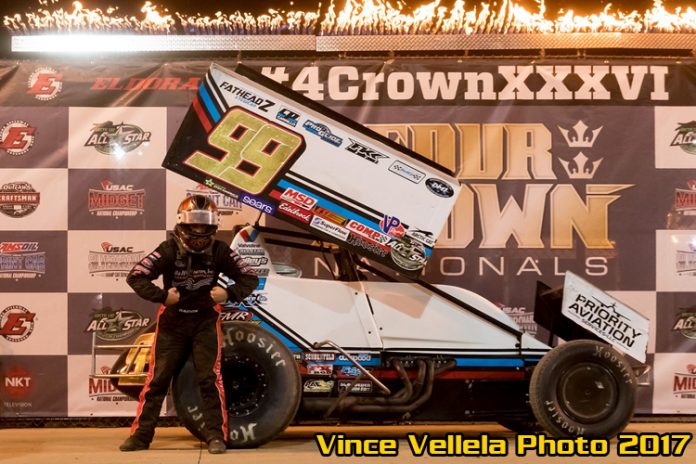 SALINA, OK – Brady Bacon has won in just about every type of race car and with nearly every series he has raced with over the years. One series he has yet to find the winner’s circle with is the World of Outlaws Craftsman Sprint Car Series. Bacon has been close on a couple of occasions to scoring that elusive first-career Outlaws win.

The native of Broken Arrow, Okla., will continue his quest for a World of Outlaws Craftsman Sprint Car Series win this weekend on Saturday, October 21 in the Twister Showdown at Salina Highbanks Speedway in his home state. The event will mark the fifth consecutive year and sixth time overall that the Outlaws have visited the ultra-high-banked oval, just outside of Tulsa.

“I always look forward to going home,” said Bacon. “We used to get to race in Oklahoma a lot more. It’s always a special occasion now when we get to race back there. We get to see a lot of friends and family when we race in Oklahoma and obviously we’d like to run well also when we are close to home.”

Being a second-generation driver, Bacon is well-versed in the steep history the World of Outlaws Craftsman Sprint Car Series has in Oklahoma. The Outlaws have contested 75 A-Feature events at six tracks in the Sooner State, dating back to the series inaugural season of 1978. A total of 25 drivers have won with the series in the Sooner State, with four of those being home state drivers.

“Oklahoma has always been a strong sprint car community and there are still cars there, just not 410s,” he noted. “Tulsa Speedway and Oklahoma City (State Fair Speedway) were really nice tracks and had a long history. It’s a shame they are not there anymore. Those fans are still there, though, so it means a lot to have the Outlaws come to Oklahoma.”


Bacon compared Salina Highbanks Speedway to Lawrenceburg Speedway in Indiana, where he has raced quite a bit over the years and has won a couple of times in a non-wing sprint car, including with the USAC National Sprint Car Series. Bacon has raced three times with the World of Outlaws Craftsman Sprint Car Series at Salina Highbanks Speedway. He finished a career-best sixth at the high-banked three-eighths-mile last year.

“I raced at Salina a little bit growing up, so I’ve been there a few times and obviously we’ve raced there the last few years with the Outlaws,” said Bacon. “You kind of know what to expect after you go somewhere a few times. Things like tires have changed over the years, which are probably more important than any changes to the track itself. We ran pretty good there last year, so we’ll go with what we think will work. Hopefully we can get another top-10 and contend for the win. It’s a really fast place, probably one of the fastest places you go, at least in how fast it feels, with the high banks. It’s a unique place and I’m looking forward to going there.”

Bacon points out a couple of keys to being a contender when competing with the World of Outlaws Craftsman Sprint Car Series. First and foremost is turning in a good run during time trials. Bacon was fastest in time trials with the Outlaws earlier this season at Tri-State Speedway in Indiana, a track where he has finished second twice with the series.

“Starting position is pretty important,” he said. “We just have to get a good qualifying spot and a good two laps in. It can be tough to pass in the heats, because the track is so fast. If we can start up front and get into the dash, then that would give us a chance to get a win. With the Outlaws, you have to put yourself in the right position to be able to win at the end of the night. If you make it hard on yourself it will be nearly impossible to get it done.”

Bacon, who is running a “True Outlaw” schedule this season, was victorious with the Arctic Cat All Star Circuit of Champions last month at the famed Eldora Speedway in Ohio. The veteran driver has also visited victory lane in a non-wing sprint car on four occasions this season as well as garnering three wins in a midget. He also has made several starts with the USAC Silver Crown Series.

“I’ve been doing it like that for several years, so I adapt pretty well,” explained Bacon of his wide-ranging schedule. “Once we get a good package with each car, it’s pretty easy, as far as the driving part goes. The set-ups and getting your car going is the hard part. I think we’ve hit on something with the winged car here lately, with winning that All Stars race at Eldora (Speedway). I’m looking forward to running a couple of more winged shows before the end of the year.”

Bacon, who was the 2014 and 2016 USAC National Sprint Car Series champion has competed with the World of Outlaws Craftsman Sprint Car Series a number of times this season. He finished a season-best fifth with the series at Tri-State Speedway in Indiana back in the spring. Bacon has four top-10 finishes with the Outlaws this season as he chases that elusive first win.

“It would definitely mean a lot,” said Bacon, when asked about winning his first World of Outlaws race. “My family and a lot of friends will be there. It would be really awesome if I could win my first Outlaws race at Salina. That would be one of my favorite places to get it done. Hopefully, we can try to make that happen.”

Tickets for the Twister Showdown, featuring the World of Outlaws Sprint Car Series at Salina Highbanks Speedway on Saturday, October 21 can be purchased online at slspromotions.ticketforce.com or by phone at 815-344-2023 and at the track on race day.