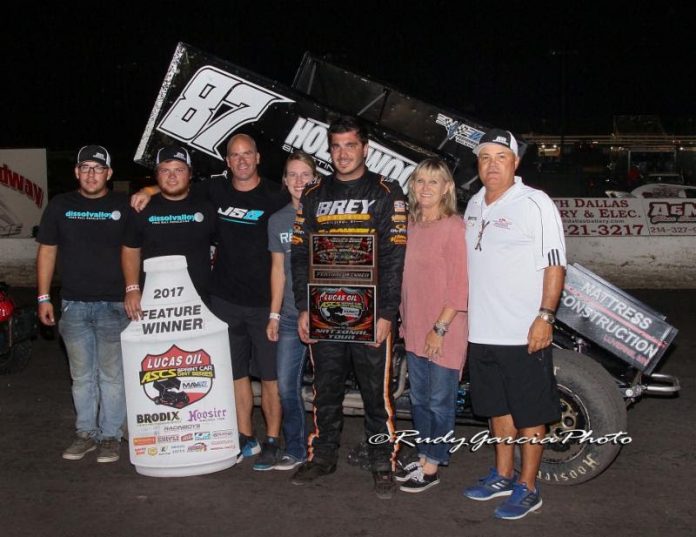 MESQUITE, Texas – The 44th annual Devil’s Bowl Winter Nationals ended with a first time winner at the famed half-mile as Aaron Reutzel battled his way to the front of the field aboard his Dissolvalloy No. 87 with the Lucas Oil American Sprint Car Series National Tour presented by the MAVTV Motorsports Network.

“We had a great racecar and a hell of a start,” commented Reutzel, who later went to give high praise to his crew. “I let Grant have full reign on the car tonight. I just told him to do whatever he wanted and, well, I’d never won at the Devil’s Bowl so what does that say? Just hats off to Grant, my whole crew, just everyone who supports me.”

Never slowed by a caution during Saturday’s 30 lap affair, Aaron’s sixth National Tour score of the 2017 season began from the fifth starting spot. With the start playing to his advantage, Reutzel moved to second on the opening lap with Sam Hafertepe, Jr. offering battle while Blake Hahn rolled away with the race lead.

Approaching traffic with 10 laps complete, Reutzel and Hafertepe trailed by just under a straightaway, but that gap was short-lived as the pair made up the distance in three laps with Aaron and Hahn beginning a multi-lap shootout for the race lead.

Diving into a slide job through the first and second turns with 13 laps complete, Aaron slid wide off the turn with Hahn able to turn down the track and reclaim the top-spot going into the third and fourth turns. Lap after lap, the process repeated itself with the Griffith Truck and Equipment No. 52 able to edge out Reutzel’s No. 87 at the line until Aaron finally gained the upper hand to lead Lap 18. Challenged again off the second turn, Aaron was able to break Hahn’s momentum to give himself a six-car length buffer into turn three.


On the race to the front, Aaron said, “I knew if I could just hold Sam off until the top cleaned off I knew I’d be pretty good. Sam and I raced pretty hard there early and Blake was a whole straightaway ahead and I got right up to him so I knew if I just played it cool I could pick and choose my lines but it was definitely a chess match on when to slide someone and when not to.”

Still sorting through slower traffic through the closing laps, Aaron avoided several close calls and in doing so and moved to a quarter straightaway advantage at the drop of the checkered flag for his 19th career Lucas Oil ASCS National Tour triumph.

With Sam Hafertepe, Jr. on his back bumper from Lap 19 on, Blake Hahn was able to hold off the current Lucas Oil ASCS National Tour point’s leader. Hafertepe in third was followed by Matt Covington with Wayne Johnson rounding out the top-five. John Caney II was sixth with Johnny Herrera rebounding from an expired engine on Friday to seventh. Travis Rilat, Harli White, and Skylar Gee made up the top-ten.

The Lucas Oil ASCS presented by the MAVTV Motorsports Network heads north to Sapulpa, Okla. for the John Christner Trucking Fall Fling presented by Emmett Hahn on Friday, October 27 and Saturday, October 28 at Creek County Speedway. The two day affair will be preceded by an open practice on Thursday, October 26. More information on the event can be found online at http://www.creekcountyspeedway.co.