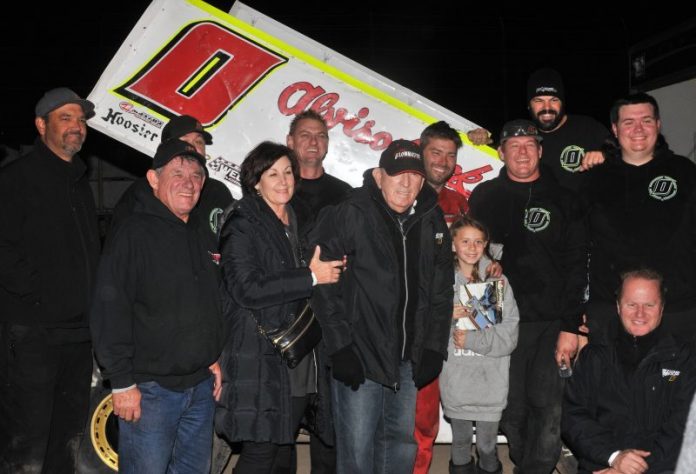 However, some of Eliason victory lane thunder may have been stolen by Bud Kaeding who claimed the King of the West-NARC championship by a single-point (910-909) over 15-year old driving sensation Gio Scelzi. It will be logged in the racing journals as the closest points chase in the sanctioning bodies history. Kaeding’s season long campaign came aboard Morrie Williams’ potent Alviso Rock Maxim.

Eliason started on the outside of the front row and won a drag race with Hoosier Tires dash winner Dominic Scelzi on the initial green to take the lead. He duplicated that effort five times for caution period restarts for minor incidents during the first 10-circuits. Once the field got sorted out, Tim Kaeding motored the Harley Van Dyke sprint car past Dominic Scelzi on lap 12 and began the process of reeling in the leader.

Slower traffic became a serious factor with a handful of laps to go and T. Kaeding got past Eliason for a single lap. Eliason returned the favor the next time around only to have the red flag come out with two to go. D. Scelzi was uninjured when his car vaulted up over turn three.

Once action resumed, Eliason set the winning standard for the two remaining two laps, chased by Kaeding, and 10th starter and fast qualifier Kyle Hirst in the Roth Motorsports KPC.

“We were in the running for the championship most of the season,” stated Eliason in victory lane. “It sure is nice to get the win and set the stage to come back strong next season.”

“It feels so good to finally win this title,” said a champagne-soaked Kaeding, a three-time runner-up in the series during the past three years. “I can’t say enough about my team and everyone who made this run possible. Gio was a great competitor and made us work hard all season long.”“

The balance of the top ten included Shane Golobic, DJ Netto, Chase Johnson and Sean Watts. Golobic efforts were notable in that he had to start at the back of the pack twice.