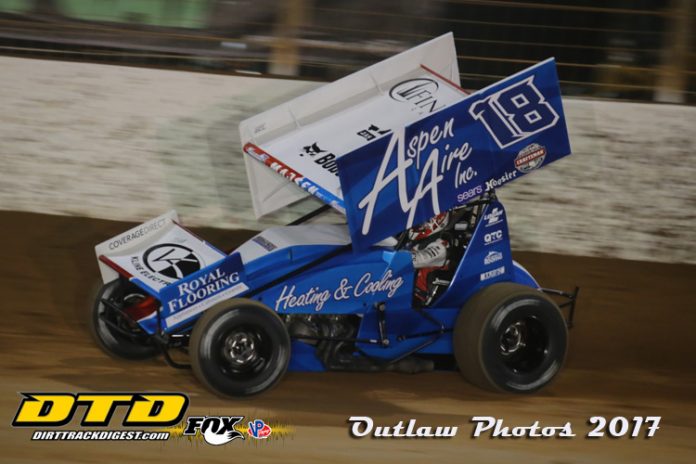 CONCORD, NC – It is with great excitement that the World of Outlaws Craftsman Sprint Car Series announces that Australian Ian Madsen will join the Series full-time in 2018. Madsen, the 2017 Knoxville Raceway Track Champion, scored his second career World of Outlaws Craftsman Sprint Car Series victory during the running of the 39th Annual AGCO Jackson Nationals at the Jackson Motorplex in Minnesota in June of this year.

“We’ve been gearing up to go full-time Outlaw racing the past few years,” the 32-year old Australian said. It’s true. In 2017, the KCP Racing No.18 raced 90 times with Madsen able to secure 11 victories throughout the season. “We’ve been committed to Knoxville on Saturday’s the past few years, but outside of that we’ve run everywhere. Running with the Outlaws will give us more structure,” Madsen added.

Madsen was a familiar face with the World of Outlaws Craftsman Sprint Car Series in 2017, scoring 21 top-ten finishes. Most recently, Madsen competed with The Greatest Show on Dirt at the Textron Off Road World of Outlaws World Finals at The Dirt Track at Charlotte Motor Speedway and came home with a second-place finish on Night 2.

Madsen is accomplished in his native land Down Under as well, scoring a preliminary night win at the Grand Annual Sprint Car Classic this season and following that up with a second-place finish in the Australian Title Finale, an event that saw over 100 cars compete.

In 16 Features at Knoxville Raceway this season, Madsen was in the top-ten all 16 times and added 12 top-five finishes, nine podiums and five wins en route to the track championship. On sprint car’s biggest stage, the 5-Hour ENERGY Knoxville Nationals, Madsen was strong all weekend, finishing inside in the top-ten of the 50-lap finale.

Madsen, crew chief Kyle Ripper and the KCP team have worked seamlessly together, becoming one of the most potent teams in the country. But Madsen knows next year will be different, “We don’t have any result orientated goals. We will do the best we can and perform to the best of our ability.”

“If you want to be the best, you’ve got to race with the best,” Madsen simply stated for the main reasoning behind joining the World of Outlaws Craftsman Sprint Car Series as a platinum member.

The World of Outlaws Craftsman Sprint Car Series is pleased to welcome Ian Madsen and the entire KCP Racing team to the Series full-time in 2018 and for many years in the future.