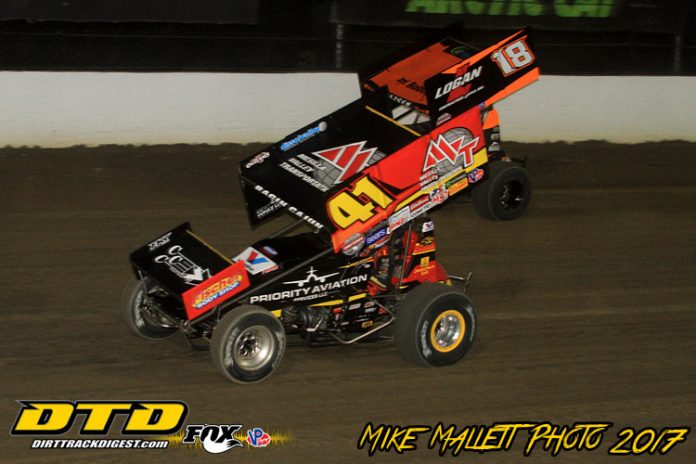 CONCORD, NC – It is with great excitement that the World of Outlaws Craftsman® Sprint Car Series releases its 2018 schedule. The beast that Ted Johnson brought to life back in 1978 has officially reached 40 years of existence. Heading into a new decade, The Greatest Show on Dirt has become the premier dirt track series in the world and appears to be stronger than ever.

A total of ninety-one dates will fill the 2018 Series schedule, including 23 multi-day events with 48 race nights. The series will visit 53 tracks in 24 states over nearly 30,000 highway miles.

The 2018 season will commence in Florida in February (#FLinFEB), with the much-anticipated and highly-revered DIRTcar Nationals, Feb. 6-17 at Volusia Speedway Park and conclude with the blockbuster Textron Off Road World Finals in Charlotte, Nov. 1-3; but the meat of the schedule is as action-packed as ever.

Following DIRTcar Nationals, the World of Outlaws Craftsman Sprint Car Series heads West to compete in the annual spring tour through California, but first The Greatest Show on Dirt will stop in Texas with visits to Cotton Bowl Speedway in Paige and LoneStar Speedway in Kilgore on Feb. 23 and 24. The FVP Outlaw Showdown moves to Wednesday, Feb. 28 and Thursday, March 1 at Las Vegas (NV) Motor Speedway. The California swing will include two-day weekends at Tulare and Stockton, a midweek visit to Placerville, and the return after a year to Ocean Speedway on Friday, March 23 and Bakersfield Speedway, Saturday, March 24.

This year’s must-see event as the Series celebrates its inception, will be the Texas Outlaw Nationals. The official two-day birthday party at Devil’s Bowl Speedway, Friday and Saturday, April 27-28, in Mesquite, Texas – on the very site where the Series ran its first race – will culminate with a $20,000-to-win payday.


Another highly anticipated show this season will be the Series’ inaugural visit to the Fairbury American Legion Speedway on Wednesday, May 30. The ¼-mile track is a fan favorite and has played host to one of dirt Late Model racing’s most prestigious events, the World of Outlaws Craftsman Sprint Car Series Prairie Dirt Classic.

The World of Outlaws will also make a few celebrated returns to tracks they haven’t been to in quite some time. After a long absence, the Series returns to Lake Ozark (MO) Speedway on Saturday, April 28; Farley (IA) Speedway on Friday, June 22; and Terre Haute (IN) Action Track on Saturday, October 13.

One additional visit to Eldora Speedway is slated in 2018, for the new #LastCallforThemAll show on Sunday, Oct. 14.

Two more major events, the Jackson Nationals and the Williams Grove National Open, will see their purse increased significantly in 2018. The 40th running of the Jackson Nationals at the Jackson Motorplex in Jackson, Minnesota will pay a hefty $40,000 to win and $3,000 to start. The 56th running of the Williams Grove National Open will pay a smooth $56,000 to the winner, with $1000 to start, making it the second richest event on the World of Outlaws Craftsman Sprint Car Series schedule behind the Knoxville Nationals.

Tickets are on sale now for the DIRTcar Nationals at Volusia Speedway Park. Stay tuned to our website, Facebook, and Twitter for more information and tickets for other events.