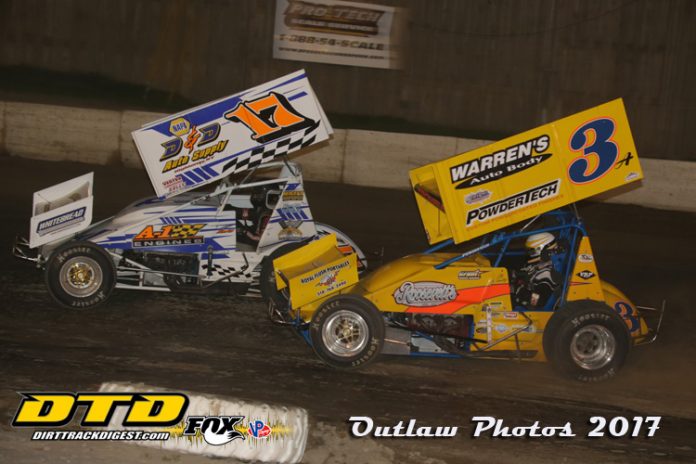 VERNON, NY – For the first time ever, three series champions will be crowned under one roof as competitors from the A-Verdi Storage Containers Patriot Sprint Tour American and Canadian Series, as well as the Champion Power Equipment CRSA 305 Sprint Tour will gather for one night to celebrate their 2017 success.

18-Year Old, Dylan Westbrook will accept his first career PST Canadian Championship by holding off Jared Zimbardi by one point in the five-race Canada series. Cory Turner came home in third followed by the Brown brothers of Mitch and Jake Brown completing the top five, respectively.

Jeff Trombley will grab the CRSA Sprint Tour Title for the first time in his career. The veteran of dirt modified racing from Altamont, New York took his Warren’s Auto Body 3A into the championship lead with only two races to go in the season. He was able to hold off Middletown, New York’s Thomas Radivoy in his Country Service Center 1Q in the final moments of the season. Radivoy won 4 A-Main events, including the finale at Orange County Fair Speedway in October. Jeff Trombley picked up one A-Main win at Utica Rome Speedway. The win and his consistency would be enough for Trombley to secure his first ever open-wheeled sprint car championship.

Cocktail hour will begin at 6:00 p.m. with dinner set to start at 7:00 p.m. The presentations of awards for all three tours will begin at 8:30 p.m. beginning with opening remarks from M.E.M President, Mike Emhof. A & J Sounds DJ Service will conclude the night through the 12 O’ Clock Hour!

Be sure to continue to follow along on all PST and CRSA Media accounts for off-season announcements pertaining to the 2018 Season!