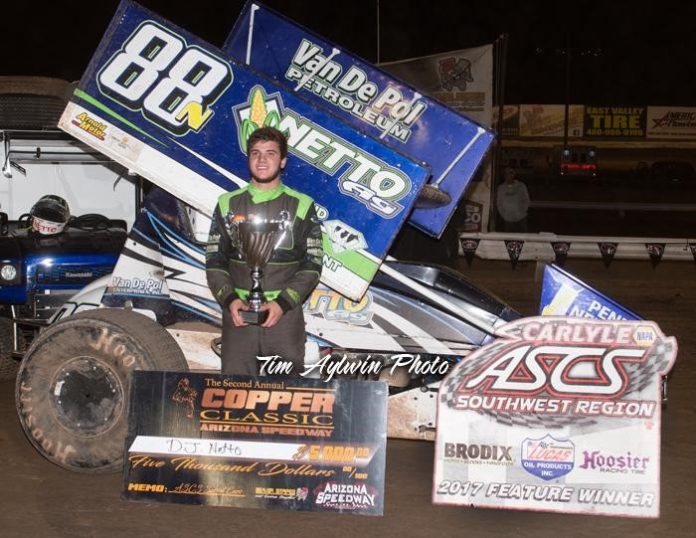 QUEEN CREEK, AZ – Sweet redemption was on tap for California’s D.J. Netto, as a DNF on Friday night turned to Victory to close out the second annual Copper Classic at the Arizona Speedway with the ASCS Southwest Region.

Taking the green from the pole, Netto worked side by side with Willie Croft through the opening lap with D.J. working the cushion of the Arizona Speedway to the race lead as the pair began the second revolution. Getting into traffic in the first five laps, Netto maintained a half straight advantage with the race continuing under green as the half-way point came and went.

Still mired in traffic, it did little to slow the No. 88n as the advantage over Croft grew to just over a straightaway.

Rolling to five laps to run, Croft’s hold on second was under fire as Justin Sanders stole the position away for a moment before getting stalled by a group of slower cars, allowing Croft to turn down the track to reclaim the runner-up spot.

Caution on Lap 21 for Jesse Baker who came to a stop in turns one and two, Netto brought the single file line past the cone with slower cars in the mix that kept Croft from mounting a charge. Completing Lap 23, the caution flew again as Willie Croft’s right rear tire exploded off the second turn.

Restarting with his right rear committed to the cushion, Netto held off any low side charges to punch his ticket to Victory Lane. Battling hard with Colby Copeland through the final two laps, Justin Sanders wheeled the low line to second in the Bob Ream, Jr. owned No. 8 with Copeland settling for the final podium step.

For continued updates on the American Sprint Car Series, from the National Tour to any of the seven regional tours that make up the ASCS Nation, log onto http://www.ascsracing.com.