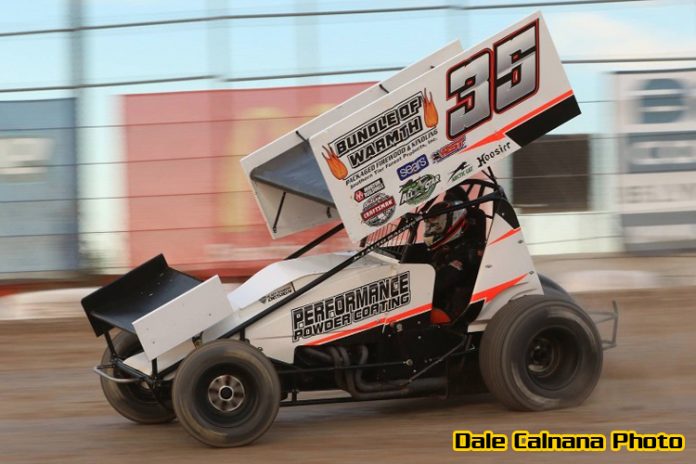 Zimbardi took home $5,555 in championship point fund money by winning his fifth PST American Series Championship, which is now the most all time in tour history. He also pocketed an additional $2,000 by finishing second in the Canadian Point Standings.

Steve Collins went back to Belfast, NY with $3,500 for finishing second on the season, followed by Kyle Drum ($2850), who finished third. Jordan Thomas, who was also named the PST Outstanding Newcomer finished fourth in the standings, followed by Derek Jonathan, and Josh Azzi, which were thanked for their full support of the American tour in 2017.

Among those in attendance who also accepted their point fund awards were Joe Trenca, who finished seventh in points, Dan Bennett finished ninth, and David Just, who finished tenth. Steven Hutchinson Jr “just missed the points” and finished 11th


Jared Zimbardi also took home honors for clinching the Evingham Site Excavation Four Laps of Fame Dash for Cash Championship, as well as the Danny Willmes Enterprises Lap Leader award. His team earned Patriots of the Year for their continued support of both tours traveling many miles all over the Northeast. His crew chief, Tony DiFonzo also won the Mechanic of the year award for the second season in a row.

Steve Collins had a banner year with multiple wins and podium finishes and came just shy of taking home his first ever PST Points Championship, but mother nature in the final races of the season took away some opportunities to chip away at the points battle. This earned him the 2017 “Tough Luck Award.” Collins was also recognized for winning the Bonnell’s Collision Centers Western Weekend finishing on the podium at both events.

Kyle Drum took home the Patriot Tank Lines Hard Charger award, with 64 positions advanced from all A-Mains, he also took home the best appearing car award, which is voted on the PST Staff.

Jordan Thomas came on board with the Patriots full time in 2017 where he also picked up his first win in 360 Competition. He was named the 2017 PST Outstanding Newcomer, but it was not easy at the beginning of each night. Thomas had an average qualifying draw of 35.10 which also gave him the “Worst Draw” award.

Derek Jonathan came back on tour with the Patriots in 2017 and his positive efforts earned him the sportsmanship award despite the unfortunate results. Josh Azzi continued to make strides with his 360 Racing Program racing full time with PST in 2017, which earned him the most improved driver.

The awards presentation was closed out by comments from PST President, Mike Emhof, thanking all the marketing partners, drivers, staff, and families for their awesome support on an awesome 15th season, and to look out for off season announcements in the upcoming months.