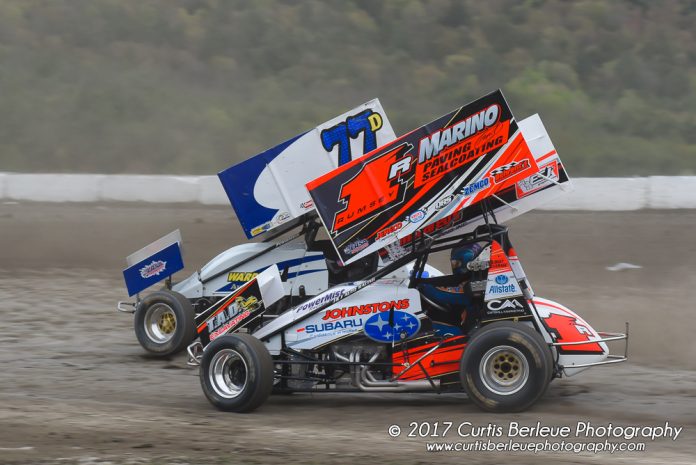 The 2017 Super Gen Products/Champion Power Equipment CRSA Sprint Tour will go down as abbreviated, but incredibly competitive. It fell victim to rain-outs and unforeseen cancellations throughout the schedule. We were able to race thirteen times at eight different northeast speedways. The track types would range with anything from a high speed, five-eighths mile hard clay at Orange County Fair Speedway to the tight, high banked confines of the third-mile Woodhull Raceway and everything in between.

While the season was short, the competition was fierce. The open wheeled tour would produce nine different winners. One of those winners, Christian Rumsey, found his way to victory lane for the first time in front of his hometown crowd at Orange County Fair Speedway. Thomas Radivoy would win the most A-Mains, four (4) during the season.

There was a total of four different points/prize money paying series built into the 2017 schedule. The Kennedy’s Towing, I-90 Northway Challenge was established by the races at Fonda Speedway, Albany-Saratoga and Utica-Rome Speedway. Altamont New York’s Jeff Trombley, in the Warren’s Auto Body 3A, would pick up top prize of $250 for winning this points series. Kennedy’s Towing, in Troy New York, has been a genuine and dedicated supporter of the CRSA Sprint Tour for many years. This year they contributed a total of $800 to this Mini Series.

Mike Emhof Motorsports assembled the Southern Tier Series for this year’s events at Woodhull Raceway, as well as Penn Can and Thunder Mt. Speedways. Even though there were some cancellations within this Mini Series, the points fund for the challenge series saw a total of $725 paid out to the top five in the standings. Circleville, New York’s Thomas Radivoy, in the Country Service Center 1Q, was able to take home the top honors with $250.

The Algonkin Motel, in Bainbridge New York, is a business name that has become a home to the events at Afton Motorsports Park over the years. This year they contributed $625 to the series exclusive to the I-88 bull ring. Schenectady’s Josh Pieniazek, in the JGS Hauling & Recycling number 9 car, would claim the $250 top prize at season’s end.


The Hard Clay Challenge went down as the Mini Series with the most racing in 2017. The CRSA Tour was able to complete four events at the Orange County Fair Speedway. It also paid the most money for any Mini Series. Nearly $1000 would go to the top five drivers. The hometown driver, Thomas Radivoy, would take the top prize of $300. A special thanks goes out to Chuck Alessi Plumbing and Heating, Hennessy Wine and Liquor, Neiger Service Center, and Johnny’s Service Station for helping support the 2017 Hard Clay Challenge.

An open wheeled veteran and cagy competitor, Mr. Jerry Sehn, would wind up becoming the Rookie of the Year. The overall championship points battle would go down to the final event at Orange County Fair Speedway on the biggest stage and in front of one of its biggest crowds. Jeff Trombley, a name Synonymous with northeast dirt racing, would prove that his legendary career was far from over. He would win the 2017 Super Gen Products/Champion Power Equipment CRSA Championship in dramatic fashion on the final lap of the Orange County main event. A youthful, talented, and highly motivated hometown driver, Thomas Radivoy, would go down fighting as the final event winner.

While there would be only one champion this year. These two competitors and teams would show their resolve and perseverance at many points throughout the season. The rest of the top thirteen were honored at the season-ending banquet at Vernon Downs Casino in Vernon New York. The top thirteen were paid out nearly $12,000 cash. 2nd through 13th were Christian Rumsey, Sydney Prince, Dana Wagner, Kyle Smith, Jerry Sehn Jr., Eddie Strada, Emily VanInwegen, Dustin Purdy, Tyler Jashembowski, Geoff Quackenbush and Brett Jaycox.

While the offseason is in full-swing, the future of the Super Gen Products CRSA Sprint Tour keeps evolving. Mr. Greg Hixson, the series race director for the last two years, is stepping away from the tour to pursue a new position at Land of Legends Raceway in Canandaigua, New York. The shoes will surely be hard to fill. Mr. Hixson has dedicated a great deal of his life to the sport he loves. His vast experiences as a driver and official has proven to be irreplaceable in any organization. While it is incredible to see him go on and take on new challenges, the Super Gen Products/Champion Power Equipment CRSA Sprint Tour will have to carry on. The CRSA Sprint Tour and racing family wish Greg the best in his future endeavors.

Mr. Peter Meskill, a former operations and marketing manager at Outlaw Speedway in Dundee, New York, will be taking over the reins as Director of Operations for the 305 sprint tour in 2018. Peter has a well-rounded resume of experience in the sport. He has been in the driver’s seat, on the spotter’s stand for NASCAR events, worked as a Marketing Manager, and has been a crew member for various motorsports disciplines. Peter will bring a force to the organization that will help propel it to the next level.

In closing, Mike Emhof Motorsports would like to thank the following marketing partners for supporting the 2017 edition of the CRSA Sprint Tour: