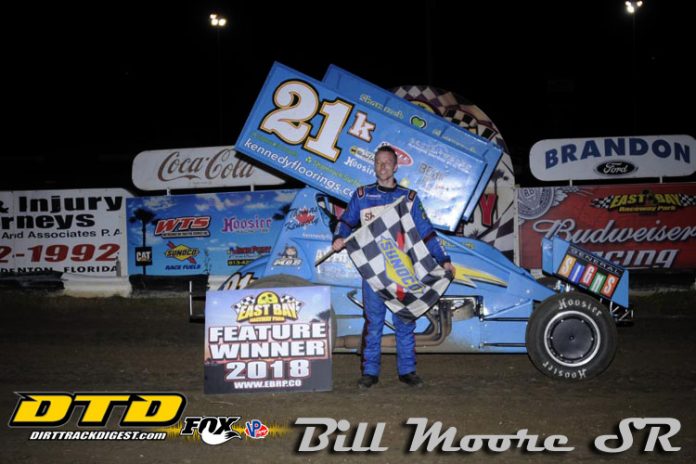 GIBSONTON, FL – Thomas Kennedy took the lead on lap 1 and while rarely challenged from behind, the Winnipeg, Manitoba quickly found his struggle with lapped traffic he rapidly encountered during night 1 of the ASCS King of the 360’s Championship at the 42nd Annual Winternationals at East Bay Raceway Park. Kennedy paid tribute to the local short tracks near his home for his experience and uncanny ability to effortlessly handle 2 and 3 wide traffic, which was the only impediment that threatened to slow down his incredible performance leading to his night one victory.

While it was hard to take your focus away from Kennedy as he totally held the crowd breathless, there was additional extremely entertaining racing from Mark Smith, Tim Schaeffer, Terry McCarl, and Robbie Stillwagon that was a performance unto itself. They each took turns with “slide-jobs” that kept crowd on their feet and the finish in question until the final laps.
Local Florida drivers Danny Martin, Jr and AJ Maddox maneuvered their way through the extremely tight field for a 6th and 8th place finish respectively, while Max Strambaugh from Chilicothe, OH slotted his 16B in-between the two for a solid 7th place finish. Travis Rilat and Wayne Johnson rounded out the top 10.

Lithia, FL driver Robbie Smith was also in control from the beginning in his 25 Lap Mini-Sprint A-Main Feature. Similar to the ASCS 360 Sprints, the most intense battle was behind the leader as Matt Carr, Jim Young and Whitey Kidd all swapped positions before they settled for 2nd, 3rd and 4th, while Smithsburg, MD driver Cameron Morral driver rounded out the top 5.

ASCS 360 Sprints and Mini-Sprint action gets back underway tomorrow with Hot Laps beginning at 6pm and racing starting promptly at 7:00.