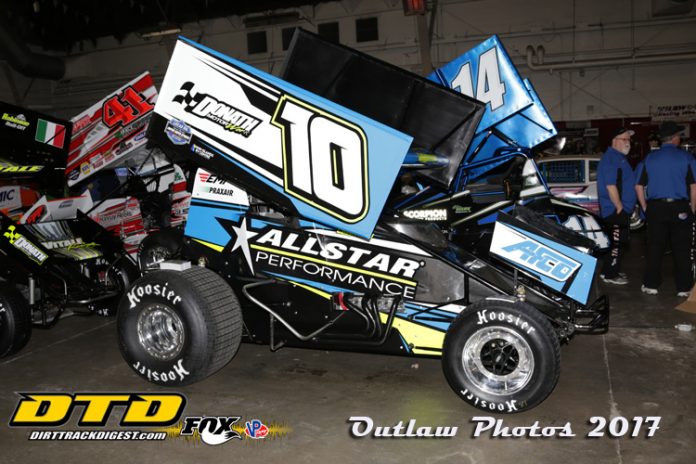 SYRACUSE, NY – On Saturday and Sunday, March 10th and 11th the 32nd annual Syracuse Motorsports Expo will see the first event on the 35th Anniversary Tour for the Lucas Oil Empire Super Sprints (ESS). Sprint fans from all over the Northeast and Canada will be able to stop by the ESS booth to see the cars and stars.

Since the first Expo in 1986 where it was held in the basement of the Onondaga County War Memorial, ESS is proud to be one of the few to be at each and every event. This year the Patrick family handed the keys over to Jeremie Corcoran and the show is already sold out.

Headlining the booth will be 2017 Lucas Oil ESS Champion Jason Barney and his familiar #87. Barney coming off a very successful campaign and will be looking to defend his championship on 2018. E&V Energy is one of Barney’s main backers, they just recently announced the new I90-I81 Series that will award points at several events.

Also having their sharp winged machines in the ESS compound will be third placeman in points last season, Paul Kinney with his #19K. Fourth in points was Paulie Colagiovanni and his #10 will be on hand along with 2017 rookie of the year Brett Wright with his #14, Lil’ Cobra Kelly Hebing looking to do the entire tour will have her #10 on display as will second year campaigner Josh Flint with his #41J.

Joining the sprints that will be at the show is seven time winner on the Lucas Oil ESS 2017 tour in Danny Varin. He will be a part of the Airborne Park Speedway display helping promote the two ESS events which include the first annual American – Canadian Clash and also the first ever visit by the World of Outlaws.


Everyone is encouraged to stop by to see the new, 35th Anniversary edition merchandise and also pick up a schedule. All the drivers mentioned earlier and many more will be on hand all weekend to talk sprint car racing!

Then it’s seven short weeks after the show that the ESS traveling road show will hit the dirt for the first time at the Outlaw Speedway where the battle for the Lucas Oil ESS crown begins.

Two long standing traditions, the 32nd Annual Syracuse Motorsports Expo and the 35th Anniversary Tour of for the Lucas Oil Empire Super Sprints… it will be excitement guaranteed!!