As far as the King of the West-NARC Fujitsu Racing Series goes, all of the pieces are quickly falling into place to go sprint car racing. And that day isn’t too far off as Kern County Raceway Park in Bakersfield is anxiously awaiting to host the series opener on April 7th. Just so we are all on the same page for this highly anticipated season, here is a collection of notes from the official King of the West-NARC notepad.

General Meeting: Northern Auto Racing Club members converged on the Roth Motorsports facility in Fresno on February 24th for the annual competition meeting. The gathering provided an overview of improvements the series continues to make to enhance both the fan and racing team experience. At the meeting, our 2018 NARC Advisory Board was officially seated and it features car owners Shawn Thomas and Steve Soares; owner-drivers Bobby McMahan, Brent Kaeding and Willie Croft; and drivers Bud Kaeding and Kyle Hirst. That makes a quorum.

The group is collectively focused on putting on a good show, building sponsorship support, improving driver safety, growing the NARC Benevolent Fund and building 410 sprint car racing on the West Coast. The more I think about it, that sounds like a flashback to the Northern Auto Racing Club glory days of the 1990’s. For those of you at home taking notes, that’s called progress!

Once again, special thanks to Dennis Roth and Todd Ventura for hosting us and serving up enough mouth-watering Tri-Tip and fixings to effectively put most of us in a food coma for the drive home.


“Hey son, I noticed you were swerving back there?” suggested the CHP officer. “Have you been drinking?”

“Nope, but I ate about two pounds of awesome Dennis Roth Tri-Tip and I had to undo my pants. Sorry about that!”

Trophy Dash: About the only thing that changed as far as the racing format goes, was our dash format. It will now consist of the top six point earners from qualifying and heat races. Or better said, it encourages everyone to be hard on the hammer during the preliminary events.

Qualifying points start at 50 and drop to 48, 47, 46, 45, and so on. Yes, that is a two point drop between the fast qualifier and second quick, but it drops by one from that point on. The winner of each heat earns 50 points, and it drops by three points per finishing position. In other words, if you miss the set up in qualifying, you can make up a lot of ground in the heat race by passing some cars. Combine the points and the top six go to the dash. The tiebreaker is qualifying times. Then throw in an inversion draw of a 0, 4 or a 6. And finally, the point system is for lining up the dash only, not for the championship side of things. Wow, I need a nap after all of that!

From a personal opinion standpoint, I’m still not convinced that winning the dash is a good thing. If you check out the 2017 KWS-NARC stat sheets, only ONE dash winner went on to win one of the 16 feature events. Just ONE!

Talent: The talent level on this year’s campaign is off the charts. You’ve got Mr. Consistency Bud Kaeding and the Morrie Williams Zero Heroes team attempting to go back-to-back. Kyle Hirst is looking to hunt down his fourth driving title behind the wheel of the potent Roth Motorsports KPG. Tarlton Motorsports has teamed up with the victory lane magnet otherwise known as Shane Golobic in their hunt for a third crown. Let’s not forget about the lightening rod Tanner Thorsen, who has saddled up with Clyde Lamar for a run at the King of the West-NARC championship. Chase Johnson is looking to post a breakout year with car owner Shawn Thomas. DJ Netto, who posted the most top 10 finishes last season in KWS action, is back in the family owned Netto sprinter looking to improve that to top five finishes. Now throw in Colby Copeland, Willie Croft, Mitchell Faccinto, Bobby McMahan, Sean Watts, Craig Stidham, Nathan Rolfe, Tim Kaeding, and Jarrett Soares and you’ve got a California A-list. The early and late season races should be a blast as we will be joined by some other big names such as the Scelzi & Macedo brothers, Buddy Kofoid, Cory Eliason and Rico Abreu. They will be making cameo appearances before they travel off to destinations unknown.

NARC Benevolent Fund: Ashley Smith, who has been spearheading the non-profits charitable efforts of the NARC Benevolent Fund for several years, announced some changes to the board to help drive fund raising efforts. In addition to Smith, the board members now include Brent Kaeding, Jim Allen, Mike Andreetta, and Bud Kaeding. Stay tuned for several new promotions to help raise money to support the fund. This would include auctions on the NARC410.com website. Once again, we are raising funds that we hope we never have to use. We thank Ashley for his drive and commitment and we thank all of you for your support of these efforts. For more information on the NARC Benevolent Fund, go here.

New Sponsors: What’s that smell? Yes, that’s bacon – my second favorite smell behind methanol at the racetrack! Which reminds me? … We have a new Trophy Dash sponsor … Sunnyvalley Bacon. They are a giant meat processing company in Manteca, CA, that is famous for their bacon – literally tons of it! The Sunnyvalley brand, which is available in just about every supermarket in California, has joined forces with the King of the West-NARC series in a promotion that will not only pay our dash winners, but will also award more than six pounds of bacon to a lucky fan (in a cooler) at every race. That sampling includes Hickory, Maple, Sweet & Spicy, Jalapeno, and Applewood flavored bacon. Which also reminds me .., we need eggs. If that sounds like a blatant commercial, it’s supposed to, because our sprint car series is now “Powered by Bacon.”

Dave Bradway Jr. Race: Dianne & Dave Durica are stepping up to lead the fund raising efforts for the 28th annual edition of the Dave Bradway Jr. Memorial Race at Silver Dollar Speedway. Laps for the May 5th A & B mains can be sponsored for $100 each. Other cash and product donations would also be gladly accepted. We are looking to start and build on other special categories besides fast time and hardcharger. We are looking for backing for the hard luck team, best looking car & crew, heat race winners and more. We are open to your ideas! If you would like to involved with a sponsorship, the Durica’s are awaiting your call at 916-988-5958 or by email at durica1414@sbcglobal.net. Don’t delay, call today!

For those in need of a quick refresher, Rico Abreu won his third Bradway race in 2017 and pocketed more than $8,000 for his overall efforts. The month of May promises to be very lucrative for our teams, featuring the Bradway race and the rich $11,000 to win Peter Murphy Classic. We will be racing for around $60,000 in prize money at those two combined events.

Random Stuff: “Fire in the Hole!” Look for the appearance of a couple of T-shirt cannons at our events this season. … Hooker Harness and Autometer.com have joined our ranks as a contingency sponsor. Welcome aboard. More announcements are coming! … Willie Croft Racing has put $1000 on the table to any team that can set a new KWS-NARC qualifying record at any track this season. … Johnstone Supply is offering up a $2000 bonus for any front row driver who decides to take the Tailgater Challenge and post a win from the back row. … We need to figure out what kind of dirt and chemicals the Supercross people are using. Dust is almost non-existent at their events. … Tickets are already on sale for many King of the West-NARC, SCCT, Civil War and Outlaw racing events this season. Lock in your seats now! … It sure is nice to see that California is recognized as an open wheel talent hotbed. At the March 9th Tulare Outlaw show, Golden State pedal-pounders locked up seven of the top 11 finishing positions. Cory Eliason almost nailed down the victory. … Swift Metal Finishing is paying a bonus to the hardcharger in every KWS-NARC feature this season. They are also posting a year end point fund to the top two drivers who passes the most cars this season … Jim Gardner and Bullet Impressions is back as our official concessionaire. He promises some awesome gear this season. … Nice to see all the posts on social media about promoters making improvements to their race track and adjoining facilities. Now race fans need to make them proud by showing up! … Had a chance to drop in on Paul Baines and the Tarlton Motorsports compound in Fresno. One word: NICE! It’s a first class machine shop and staging facility for their open wheel efforts. It features five different race cars in various stages of construction for the victory lane aspirations of Shane Golobic, Carson Macedo, Cole Macedo, & Tommy Tarlton.

So at this point, you should be gearing up for our three events in April. They include the aforementioned April 7th season opener at Kern County Raceway Park, and an April 20-21st doubleheader weekend at Ocean Speedway and Thunderbowl Raceway, respectively. 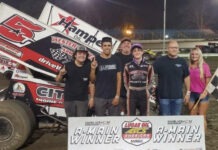