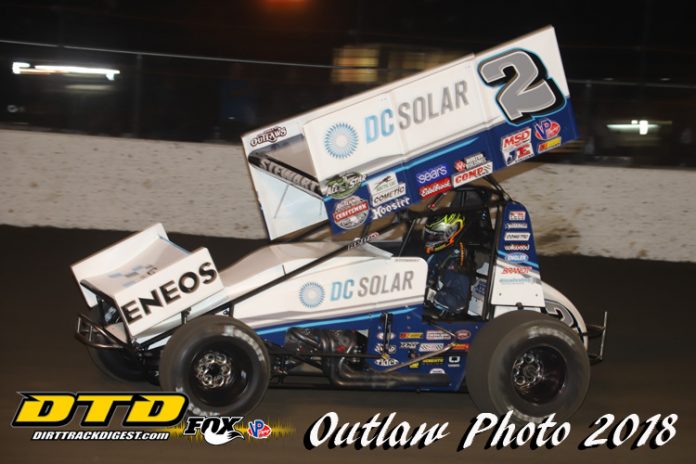 SALINA, OK – Tickets are now on sale for the Twister Showdown, featuring the World of Outlaws Craftsman Sprint Car Series at Salina Highbanks Speedway in Salina, Okla., on Saturday, May 5. Tickets can be purchased online at slspromotions.ticketforce.com or by calling SLS Promotions at 815-344-2023.

Kerry Madsen was victorious last year in the Twister Showdown, winning in a thrilling battle with Brad Sweet, Donny Schatz and Shane Stewart. For Madsen, who is originally from St. Marys, NSW, Australia, it was his first triumph at Salina Highbanks Speedway.

Daryn Pittman, who hails from nearby Owasso, Okla., won at Salina in 2016. That victory was a popular one, with many family and friends in attendance. Another Oklahoma native won at Salina in 2015, with Shane Stewart from Bixby, taking the checkered flag.

Leading the way for the full-time competitors on the road with the World of Outlaws Craftsman Sprint Car Series this season is Schatz, the nine-time and defending series champion. The North Dakota native already has three wins this season and is on top of the standings as he chases his 10th title. Salina Highbanks Speedway is one of the few tracks on the schedule that Schatz has not won at in his career.

Sheldon Haudenschild, who scored his first-career World of Outlaws Craftsman Sprint Car Series win on the opening night of the 2018 season at Volusia Speedway Park in Florida, has a pair of victories and is second in points. The son of Hall of Famer Jac Haudenschild has finished among the top-10 in five of the first six races this season.


Brad Sweet, who was runner-up in points last year to Schatz, is third in points on the strength of five top-10 finishes. Jason Johnson has four top-10 finishes through the first six races this season and is fourth in the current series standings.

Stewart is fifth in points, aboard the No. 2 for Kyle Larson Racing. David Gravel is just behind Stewart in the standings in the sixth position. Pittman, the 2013 series champion is currently tied for seventh in points with Brian Brown. Tim Shaffer is ninth in the standings with Paul McMahan rounding out the top-10.

Veteran drivers on the tour again this season include: Kraig Kinser, Jason Sides and Greg Wilson. Young drivers on the circuit in 2018 include: Logan Schuchart, Jacob Allen, Clyde Knipp and Brent Marks.

Ian Madsen, Parker Price-Miller and Dane Lorenc are all taking to the Outlaws trailer full-time for the first time in their respective careers this year.

Tickets for the Twister Showdown, featuring the World of Outlaws Craftsman Sprint Car Series at Salina Highbanks Speedway on Saturday, May 5 can be purchased online at slspromotions.ticketforce.com or by calling SLS Promotions at 815-344-2023.