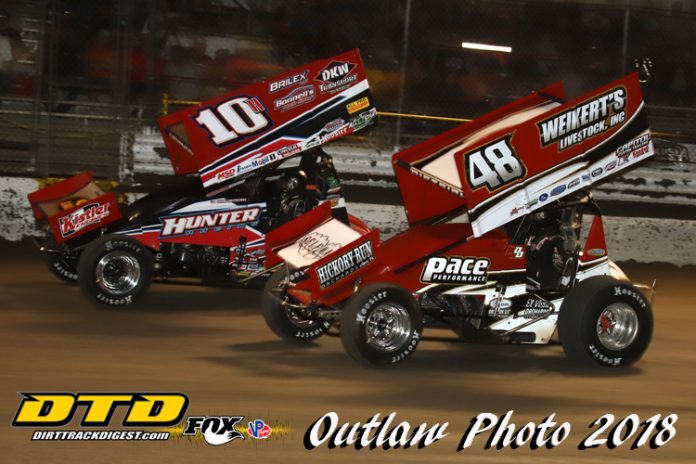 BROWNSBURG, IN – Since its initial release just before Thanksgiving, the 2018 Arctic Cat All Star Circuit of Champions presented by Mobil 1 schedule has undergone a number of changes, one of which involving Ohio Sprint Speedweek presented by Cometic Gasket.

All three previously scheduled events at Millstream Speedway in Findlay, Oh., have been cancelled. Despite the loss, two out of the three events have been replaced including the Ohio Sprint Speedweek presented by Cometic Gasket finale.

Shane Helms will lead the promotion of both the Atomic Speedway Speedweek finale and the Waynesfield event on May 27.


“I appreciate the support of the Brad (McCown) and Greg (Shobe) on getting these events back on the schedule after cancelling our Millstream dates,” said Shane Helms. “I’m looking forward to both events in May and June. Thank you to everyone that has helped make this happen.”

The All Star visit to Millstream Speedway scheduled for Monday, September 3 – Labor Day – will not be replaced. Instead, Wayne County Speedway will utilize Monday night as a rain date for their annual Pete Jacobs Memorial program on Sunday, September 2.

As previously mentioned on social media, Attica Raceway Park in Attica, Oh., added an All Star Circuit of Champions program to their 2018 schedule, padding an already impressive Labor Day/Attica Ambush weekend slate with a second visit by the All Stars on Friday, August 31. The Friday night program, also awarding a $5,000 top prize, will act as the preamble for the highly anticipated Dirt Classic Ohio on Saturday, September 1.

Lernerville Speedway in Sarver, Pa., will utilize a rain date of Friday, June 1, for their event scheduled for Friday, May 4. If the rain date is needed, the Arctic Cat All Star Circuit of Champions presented by Mobil 1 will try to find a neighboring facility to schedule an event for Saturday, June 2.

The visit to McKean County Raceway in East Smethport, Pa., scheduled for Sunday, July 8, has also been removed from the schedule.