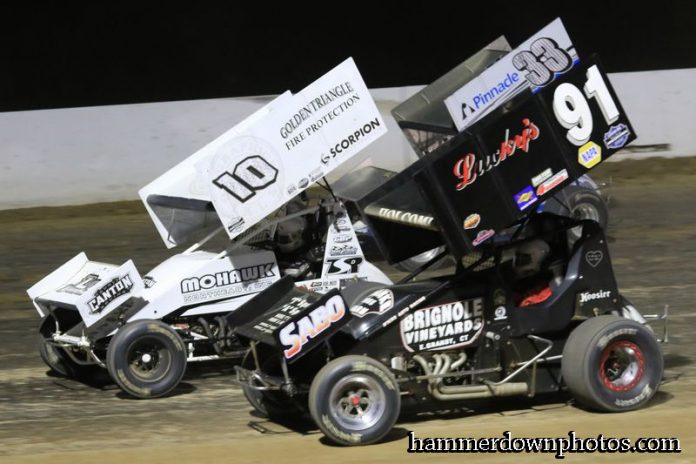 SYRACUSE, NY – For the Lucas Oil Empire Super Sprints (ESS) and the 35th Anniversary Tour comes the return of the very popular Loyalty Bonus and also the announcement that every full point A-Main will pay at least $275 to take the green.

The bonus was set up three years ago to reward teams that run 90% of the full point shows. With their dedicated effort comes an extra $500 cash on top of all point fund monies they will earn throughout the 2018 campaign.

The other announcement that came over this past weekend where several sprint cars were on display at the Syracuse Motorsports Expo was that every full point A-Main payout has been upped to $275 to start minimum.

“Thanks to increased sponsorships we are very fortunate to keep increase payouts and with no extra cost to the promoters that book ESS events,” noted long-time ESS President Chuck Miller, “Lucas Oil and Hoosier Tires have been key in helping us offer such a large point fund and increased nightly payouts, we just can’t thank them enough.”


For several years, each ESS full point A-Main paid at least $250 to take the green. New for 2018 will now see that increased to $275. That along with added purses of CNY Speedweek, $300 to start, Cornwall, $325, as well as Granby, Drummond and Le RPM, $500 to start the nightly payoffs will help the teams as well.

The first green flag and the battle of the 35th Anniversary Lucas Oil champion starts on Friday night, April 20th at the Outlaw Speedway for a $2,000 to win, $275 to start event. One week later, the Fulton Speedway will showcase the same payoff as a start to their Highbank Holdup Weekend.

The upcoming season will se 28 full point events at 16 of the best dirt tracks from New York and Canada…the 35th Anniversary season for the Lucas Oil ESS gang will be excitement guaranteed!