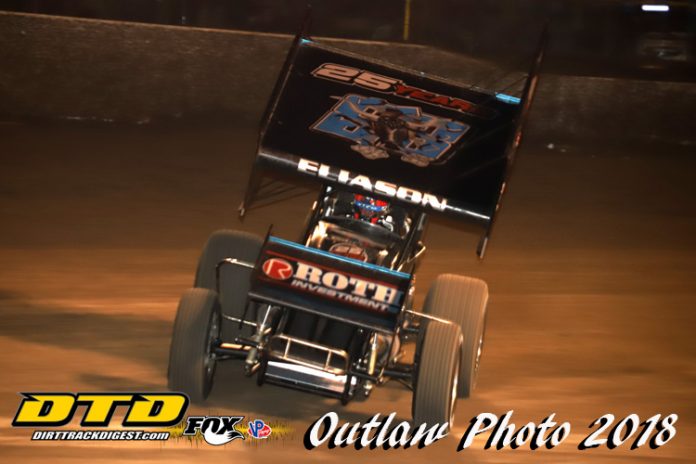 Eliason won the Craftsman Club Dash, earning the pole for the 30-lap Feature alongside FVP-sponsored driver Brian Brown. Eliason powered out to the early lead on the elbows up surface and reached lapped traffic on the fourth circuit.

The first of a handful of cautions came on lap 10 as the hole in turn three swallowed up Brown while he was running second. That allowed Rico Abreu to assume second only temporarily, as a few laps later during a caution for Parker Price-Miller, Abreu surrendered his runner-up position and pulled into the work area.

When action resumed, Madsen found himself in second looking for a way around Eliason. The Selma, CA native was masterful in traffic, never allowing the field to mount a serious challenge. The closest call of the night for Eliason was entering turn one on lap 24, as his No.83 car hit a rut and bobbled heavily.

Brad Sweet, while running in the top five, slowed to a stop with three laps remaining giving the field one last chance to steal a victory from Eliason. But, it was not meant to be tonight, Eliason was the class of the field as he distanced himself from the field on the restart to win by nearly two seconds.


“It feels great to finally get an Outlaw win. And at home, too,” an out-of-breath Eliason said in Victory Lane. “That track was technical and it definitely wore me out. Hopefully we can another one next weekend,” Eliason added.

Ian Madsen was pleased with his runner-up finish, “We had nothing for those guys. Congrats to Cory on his first career win. This was a great night for our KCP team. We haven’t had much luck to start the season, so it’s great to a good night under our belt.”

Likewise, Shane Stewart was also happy for his first podium finish of 2018. “I don’t think it was the prettiest third place run; but we’ll take it,” Stewart said with a chuckle. “We need some good runs to get our momentum rolling.”

10th-starting Carson Macedo followed up his top-five at Tulare with an impressive fourth place finish. Tim Kaeding, aboard Jason Sides No. 7S, came from 13th to complete the top five.

During intermission, the World of Outlaws announced that the Brad Sweet Placerville Short Track Showdown has been postponed to Wednesday, September 12. The Outlaws continue their 40th Anniversary Season Friday, March 23 at Ocean Speedway before heading south to Bakersfield Speedway on Saturday, March 24. Tickets for both events are still available at woosprint.com. If you can’t make it to the track, be sure to tune into DIRTVision.com for live video of every World of Outlaws Craftsman Sprint Car Series race in 2018. 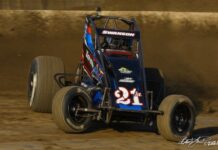 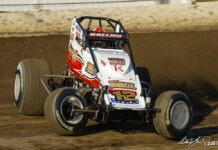