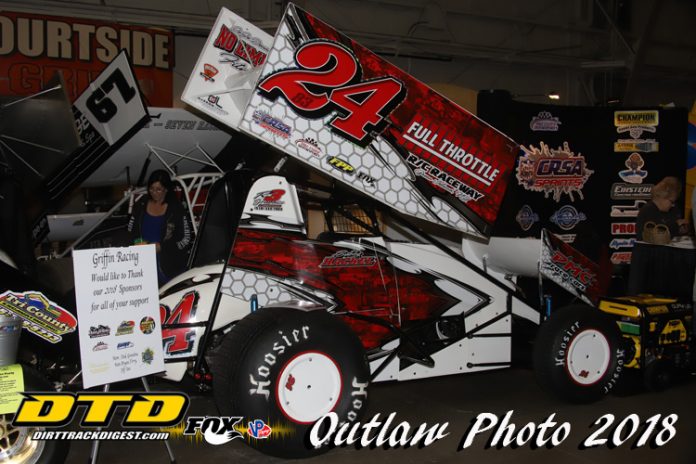 SODUS, NY – Although the first race does not begin for the A-Verdi Storage Containers Patriot Sprint Tour for another month, the Mike Emhof Motorsports Inc. operated series has been busy promoting and marketing the tour at car shows and Expo’s the last three weekends across Central New York and the Souther Tier.

The first pre-season show was Finger Lakes Speed World in Auburn, New York where Darryl Ruggles had his 48jr car on display. It was another fantastic show put together by Jim Olin for the third consecutive year with this year being the biggest show yet.

The following weekend, the series was of course part of the 32nd annual Syracuse Motorsports Expo at the New York State Fairgrounds. Putting their cars on display were Paulie Colagiovanni in his Einstein Construction / Allstar Performance No. 10, Pete Richardson in his Prestige Pool & Spa No. 67, Steve Glover in his Danny Willmes Enterprises No. 121, Joe Trenca in his Mucci Motorsports No. 98, and rookie Tim Schneider in the Bragman Motorsports No. 3.

Then this past weekend, the series traveled to the Southern Tier to be a part of two separate shows. The Woodhull Raceway car show at the Arnot Mall in Big Flats, NY had Championship contender, Kyle Drum with his No. 47 Empire Tractor / Skip’s Custom Flooring machine on display as thousands of fans checked out his 2018 sprinter and pick up their 2018 PST schedules!

A little further to the west was the Olean Mall show in Olean, NY. Reigning Champion, Jared Zimbardi had his mount at the Olean show with an awesome “throwback” color scheme used by his father Tim when he drove the sprints on the Patriot Sprint Tour.


A multitude of schedule cards have been distributed the past three weekends for the race fans of the northeast. If you were unable to pick up your 2018 PST schedule, you can log on to patriotsprinttour.com to check it out! That is also where you will be able to stay up to date with other PST announcem