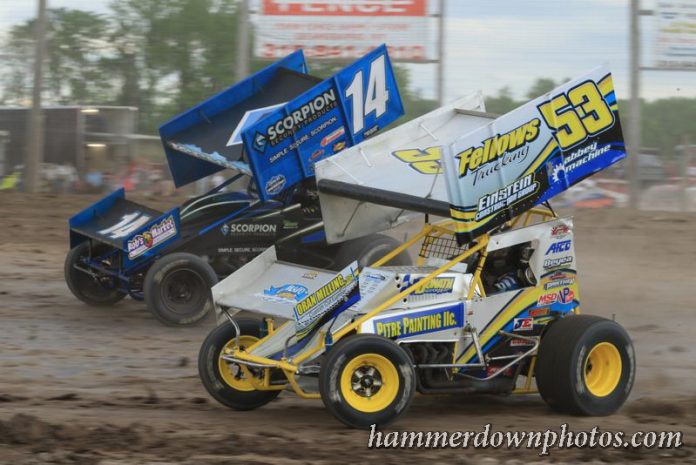 For the third year in a row, Donath MotorWorx has signed on to be the title sponsor and once again the driver that earns the most points over the five nights will take home a cool $1000! The top 10 in the points will receive from the cash point fund. All events will pay at least $2500 to win and $300 to start.

Donath MotorWorx is located in Syracuse, NY, owner Brian Donath has been a well-respected engine builder for many years. Not only will you find many of his powerplants under the hoods of ESS sprint cars, but he also builds big and small block modified engines and is also a certified crate engine builder and repair facility.

With the Fourth of July now falling on a Wednesday, Speedweek was moved back one week on the calendar for 2018. On the 4th, under new promotions from Tyler Bartlett, Can-Am Speedway will kick the action off and with a bang by bringing back the famed Pabst Shootout. The Lucas Oil ESS sprints will be joined by the 358 Modifieds and the DIRTcar Sportsman Series.


The next night it’s off to another track under new promotions with Paul Cole taking over the Ontario County Fairgrounds oval now known as the Land of Legends Raceway. Also, back is the popular double header of the ESS sprinters with the Super DIRTcar Series Big Block Modified Tour.

On Friday and Saturday traditional Central NY stops of Brewerton and Fulton Speedways will have the Speedweek events spice up the nights. Brewerton is home of the Big Block Modifieds while Fulton will now be showcasing the ever growing 358 Small Block Modifieds.

On Sunday, the Donath MotorWorx Speedweek Champion will be crowned at Utica-Rome Speedway. Also, on the card is the second Super DIRTcar Series event for the Big Blocks making for huge event closing out five nights of speed!

All tracks would like to let fans know that camping is free to anyone so come out and make a week of it!

Michael Parent was the initial Speedweek champion back in 2013, other Champions were Jason Barney (2014), Steve Poirier (2015-16) and Danny Varin in 2017. CNY Speedweek brings out the best in competition, along with the champions mentioned above, Chuck Hebing, Matt Tanner, Mike Mahaney, Larry Wight, Stewart Friesen, Mark Smith, Lucas Wolfe, Bryan Howland, and Davie Franek have picked up wins.

Mark the dates of July 4th-8th, the Sixth Annual Donath MotorWorx CNY Speedweek… It will be excitement guaranteed!!