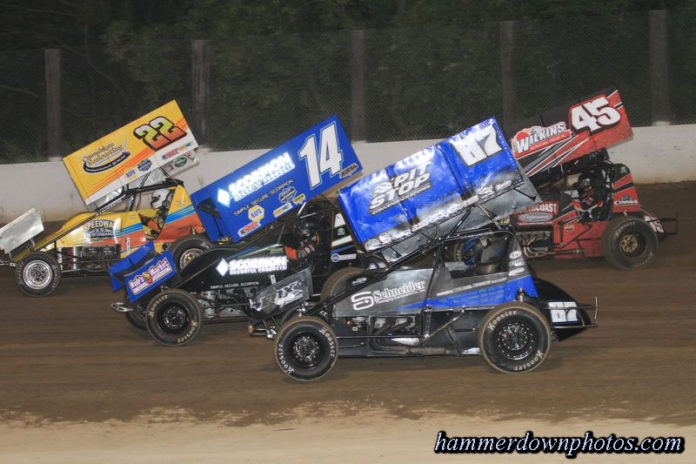 SYRACUSE, NY – As the first green flag is set to waive on Friday night, April 20th at the Outlaw Speedway, not only will the battle for the 35th Anniversary Lucas Oil Empire Super Sprints (ESS) Championship begins, it also marks the first event on the NAPA Auto Parts US Tour.

The 2018 campaign marks the fourth consecutive season that NAPA has backed the point fund for all events in the United States for the Lucas Oil ESS Tour. Last years champion Jason Barney took home the lions share on the point fund monies offered besting Matt Tanner, Danny Varin, Paul Kinney and Matt Billings for the US Crown.

This year the events in the US start at Outlaw and will cap off with the show-up point event on Tuesday, Oct. 2nd at the Utica-Rome Speedway for the $3,000 to win Cole Cup.

In the U.S., there are over 57 distribution centers, 16,000 NAPA AutoCare Centers and more than 6,000 independently-owned and company-owned stores that offer more than 500,000 parts for automotive and industrial applications. Since 1936, NAPA continues to serve auto service professionals, do-it-yourselfers and everyday drivers with quality parts and supplies to keep cars, trucks and equipment performing safely and efficiently.

The top 15 in the points from all the events in the US will share from the NAPA point fund which is the second largest offered on the Lucas Oil ESS Tour.


On April 20th, Jason Barney will be on hand in his quest to repeat as the ESS champion, Kinney, Tanner, Paulie Colagiovanni, Billings, Jeff Cook, Coleman Gulick, Varin, Steve Poirier, Jonathan Preston and many more will be in the pits.

NAPA Auto Parts and the NAPA Know How along with the Lucas Oil Empire Super Sprints…tradition continued of excitement guaranteed!