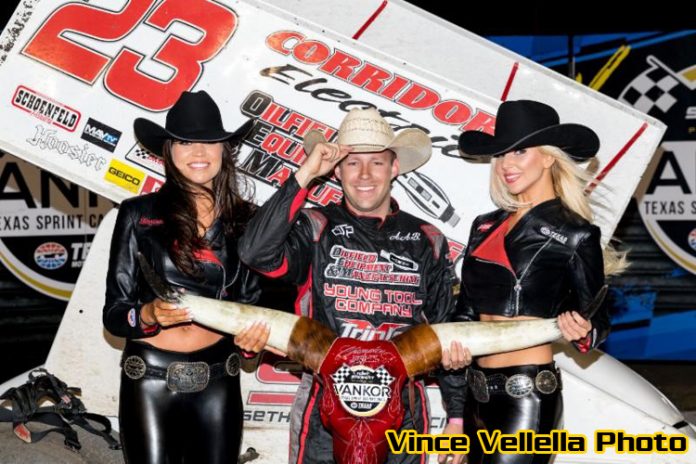 FT. WORTH, TX – For the third time in his career, Washington’s Seth Bergman rolling into Victory Lane at the Texas Motor Speedway Dirt Track to pick up the first night of Tony Stewart Presents the Vankor Texas Sprint Car Nationals with the Lucas Oil American Sprint Car Series presented by Sawblade.com.

“This place had been good to me. We’ve won a couple of races here over the past few years, but nonetheless, he [Sam Hafertepe, Jr.] made me earn it,” explained Seth when asked about the challenges for the lead.

“The track was heavy tonight and I was good in open air, but when I got into traffic, it really dirtied up the wing and made it tough to get around there so that made lapped traffic even tougher and Sam obviously did a good job getting to me. I feel like I made a few mistakes there that let him get close, but we got lucky with the caution when he got to the inside of me. Sometimes it pays to be lucky like that, and tonight it did.”

Drawing the pole for the 25-lap feature event, Bergman would have to take two shots at holding the lead as the red flew following the first attempt for Harli White who flipped wildly into the wall through the first and second turns after contact from Wayne Johnson. Both drivers were unharmed.

With the field restacked Seth again took off with the lead in the Oil Field Equipment and Manufacturing No. 23 with Matt Covington and Tony Stewart giving chase. Caution working the third-lap, Matt Covington would have to drop to the tail of the field as the left sideboard came off the top-wing of his Covington/Graves Motorsports No. 95.


Keeping Tony Stewart at bay on the restart, Bergman would pull several car lengths over the Rush Truck Center No. 14 with Sam Hafertepe, Jr. holding third. Racing past Stewart on Lap 10 for the runner-up spot, Hafertepe began to close the gap as Bergman started to contend with slower traffic.

Fighting dirty air with laps clicking off, handling the No. 23 became a handful for Seth with the car darting every way but straight as traffic continued to work into the mix.

Stalking into the final two laps, the stage was set for Sam Hafertepe, Jr. Building the run as the leaders ran to the white flag, Seth worked into turn-one only to have dirty air again come into play as the two trailed a slower car. Trying to diamond through the first and second turns, it was too late as Hafertepe shot to the race lead only to have the caution lights blink on as Chance Morton spun to a stop off the second turn.

Back to the last fully completed lap, the final two revolutions saw Seth hit his marks perfectly as he stretched his advantage to 1.007 seconds over Sam Hafertepe, Jr. at the drop of the checkered flag. Working to third on Lap 17, Sammy Swindell held on to claim the final podium step with Tony Stewart fighting a failing power-steering gear to hold the final transfer spot into Saturday’s A-Feature. Running from the ninth starting spot, Blake Hahn completed the night’s top-five.

With the top-wing starting to buckle, Danny Jennings was able to hold on to finish sixth. Having to transfer through the second B-Feature, Australia’s Scott Bogucki stormed through the field from 20th to earn the CP-Carrillo Hard Charger of the Night. Brandon Hanks was eighth with Robbie Price coming from 18th to ninth. The top-ten rounded out with Johnny Herrera.