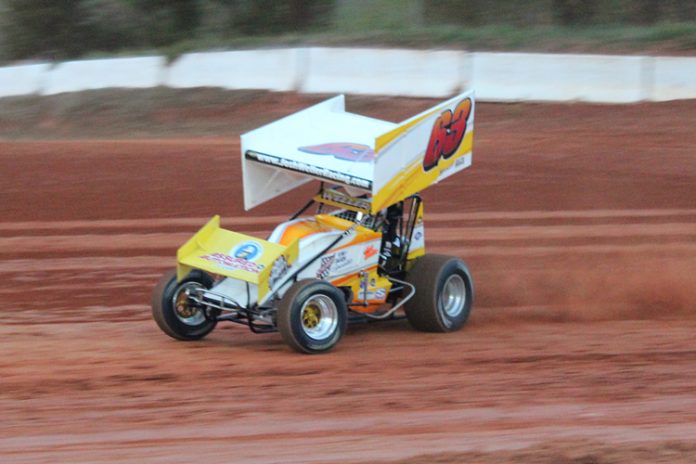 GASTONIA, NC – Josh Weller of Mertztown, Pennsylvania found himself in victory lane for night one of the USCS/URC North vs. South Shootout.

The USCS sanctioned two-day event kicked off last night at the beautiful Carolina Speedway, in Gastonia, North Carolina. United Racing Club brought eight cars for the long haul to represent the Yankees, and USCS brought in another twenty cars to defend their home turf, bringing the field to a solid 28 entries.

Utilizing a passing point system, “Team Capitol Customs” gained an edge by securing Justin Whittall as the A-Main pole sitter. Whittall showed his strengths on the slick surface for the first handful of laps until the field was brought to a hault due to a tangle on the front stretch involving URC Rookie, Ryan Quackenbush.

As the track got dustier, some opted to remove themselves from the race, including last year’s URC point champion, Curt Michael. “It was just too dusty. I couldn’t see a thing. It wasn’t worth it for me to stay out there.”


USCS’s Eric Riggins stole the lead from young Whittall on lap 10 going around him in a bold move on the outside. Riggins started to pull away, until a caution came up, giving Josh Weller exactly what he needed to beat Riggins. After a battle with each other and the racing surface, Josh Weller took the lead.

Third place runner Robbie Stillwaggon was battling a flat tire when it gave way on the final lap, forcing him to slow on the back stretch. At the same time, Lance Moss went for a wild ride, flipping end over end three or more times. He was able to remove himself from his car and signal to safety crews that he was “OK.”

In the end, it was URC regular, Josh Weller who found himself in the winners circle, celebrating with his family, his fiancée Jess, and his crew. “What a way to start the season,” Weller said as he caught his breath.

Tomorrow, the Shootout is set to continue at Lancaster Motor Speedway in Lancaster, South Carolina. There is heavy rain in the forecast and a call will be made early.