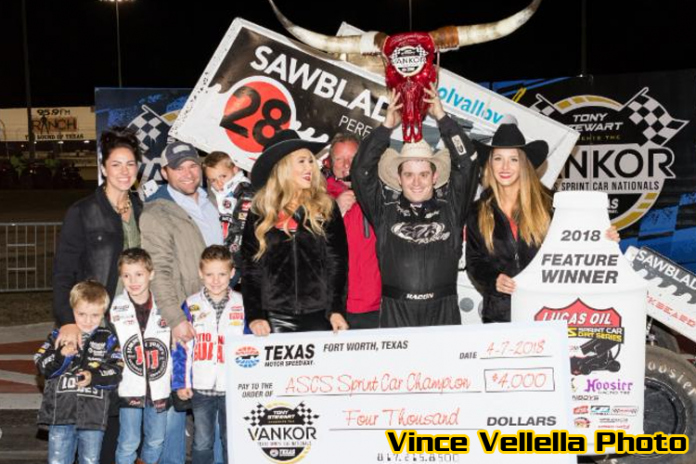 “This was great to race here this weekend. I’m from Oklahoma originally but I don’t get to race down here close to home very much so this was special having my parents and some of my life-long friends here. I just wish my wife could and kids could have been here but I’m sure they were watching,” stated Brady on his win in the Sawblade.com No. 28x.

“We had to change the steering gear, pump, box, just everything but these guys busted their butts and got us back out there,” explained Brady. “I just have to thank James Cooper for the opportunity to run his car and thankfully we were able to put it all together and get the win. It’s always good to get one this early in the year.”Having to thrash on the car after the Heat Race due to a failed Steering system, it left little time to focus on setup, but nevertheless, Brady tore through the field from seventh to pick up the win.

Three attempts at the green as a false start was followed by a red for Wayne Johnson, who was unharmed after flipping off the second turn, the chase was on at the front of the field as Sam Hafertepe, Jr. led the way over Tony Stewart and Seth Bergman. Quickly into slower traffic, things went awry in an instant for Hafertepe while working Lap 7 as evasive action to avoid a crash was not enough. Going over another driver’s right rear tire, the No. 15h flipped into the turn-four wall. Sam was unharmed but unable to continue.

Avoiding the crash, Tony Stewart positioned his Rush Truck Center No. 14 at the front of the lineup. Steadily pulling away after the restart, traffic came into the picture just after the 10th lap. Working past Seth Bergman for the runner-up spot, traffic would play to the advantage of Brady Bacon as the No. 28x blasted into the lead on Lap 13.


Caution on Lap 15 as a line came apart on the power-steering of Bergman’s No. 23, the restart put Sammy Swindell in the mix with Tony Stewart as Bacon turned up the heat. Steadily pulling away, the race for second went to Swindell as Stewart slowed with mechanical issues on Lap 21 that sent the No. 14 to the Pits.

Remaining under green the remainder of the race, Brady Bacon ran to the checkered flag 2.171 seconds ahead of Sammy Swindell with Johnny Herrera coming up to round out the podium in the Mesilla Valley Transportation No. 45x. Racing through the first B-Feature, Travis Rilat stormed ahead 13 positions to earn the CP-Carrillo Hard Charger of the Night with Brandon Hanks crossing fifth.

Another field of 35 drivers made the call for the second night of Tony Stewart presents the Vankor Texas Sprint Car Nationals. Heat Race wins went to Brady Bacon, Christopher Bell, Brandon Hanks, and Johnny Herrera. B-Features were topped by Matt Covington and Skylar Gee. One Regional Provisional was used by Alex Sewell.