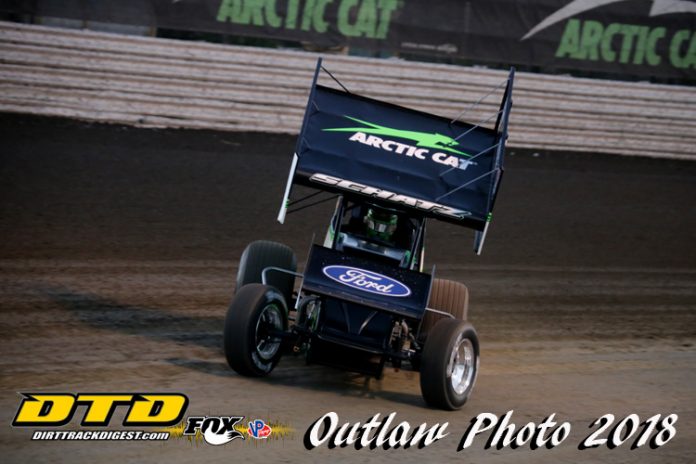 QUEEN CREEK, AZ – Donny Schatz started 12th and passed Shane Stewart on a Lap 20 restart to score his first career victory at Arizona Speedway Saturday Night in front of a standing room only crowd. It was Schatz, who was the fourth and final driver to lead a lap in the Feature, fourth win of the season as he extended his early season points lead in his quest for his tenth Series Championship.

California native Cory Eliason continued to show impressive speed winning the Craftsman Club Dash and leading the opening lap of the 30 lap Arizona Desert Shootout. That lead was short-lived, however, as Sheldon Haudenschild slid in front of the Roth Motorsports No.83 to lead the second circuit. Haudenschild, who entered the evening second in points and tied with Schatz with three wins, appeared to be the man to beat, extending his lead to a sizeable margin through lapped traffic.

A Lap 13 caution bunched the field together and Haudenschild extended the lead once again. The move of the restart, which proved to be crucial at the race’s end, was Donny Schatz powering from eighth to third on the bottom off of turn four.

Lap 16 saw disaster strike for Sheldon as the thin cushion in turn four got the better of the young Wooster, OH native. It was the second time in the young 2018 campaign that Haudenschild has brought out the yellow while leading. Unlike at Tulare, this time there was no damage to the NOS Energy Drink No.17 machine and he was able to restart at the rear of the field.

Sheldon’s misfortune moved Shane Stewart, who advanced forward from his fifth starting position, to the point. By Lap 20, when the thin cushion claimed two more victims – Brad Sweet and Brian Brown, Schatz had worked by Joey Saldana for the runner-up position and was ready to pounce on the next restart. Pounce he did, as Schatz shot underneath Stewart and led down the backstretch only to have the pass negated by another caution. That set up a single-file restart and Stewart went to the bottom entering turn one, only to see Schatz, this time on the outside of the speedway, roll by him down the backstretch once again. In an attempt to get the lead back from Schatz, Stewart allowed Saldana to regain the runner-up spot.

A pair of late race restarts allowed the field to have a crack at Schatz and Saldana had the crowd holding their breath with two to go as he narrowed the gap to three car-lengths. A valiant effort was not meant to be for the “Brownsburg Bullet” as he finished 0.821 seconds behind the Tony Stewart Racing No.15.

Schatz first order of business in Victory Lane was to express his thoughts to the Humboldt Broncos community following their hockey team’s tragic accident Friday evening. Additionally, the Tony Stewart Racing No.15 team had a little bit of a different look in the pit area tonight. “We were minus the backbone of our team tonight, Scuba broke his ankle at Bakersfield and is on the couch for a while,” Schatz explained.

“We’ve won in Arizona before, but not at this place. My race car was awesome all over the race track tonight, a true testament to my team’s excellence,” the Fargo, ND native said. When asked about the multitude of late-race restarts, Schatz chuckled and said, “I’m getting older and the older I get, the more patient I am.” It was Schatz’s 265th World of Outlaws victory in his illustrious career.

Saldana, who finished fourth last outing at Bakersfield, was pleased with his car speed once again. “Kevin Rudeen gives us a great car, with great equipment. We have everything we need to succeed and it’s starting to show. Hopefully we can win one of these soon, we’ve been real close the last two weeks.”

“It’s hard to win these races and it’s hard to win against guys like Donny Schatz. When you can finish on the front stretch, it’s a solid night,” Saldana added.

The KSE Hard Charger award went to Logan Schuchart, who charged from 16th to finish third. “What an improvement that was from our Qualifying effort. I can’t thank my guys enough. Our team never gives up,” a pleased Schuchart said.

Stewart settled for a fourth-place finish, his third straight top-five outing with Eliason rounding out the top five. Despite spinning past the halfway point of the race, Sheldon Haudenschild charged back to finish seventh at the checkered flag.

The World of Outlaws Craftsman Sprint Car Series heads to the Midwest next week with a date at the Jacksonville Speedway in Illinois on Friday, April 13th before heading to Haubstadt, IN the following night to compete at the Tri-State Speedway. If you can’t make it to the track, be sure to watch all the action LIVE on DIRTVision.com.

For full results from Arizona Speedway on April 7, 2018 visit WoOSprint.com/results or click here!