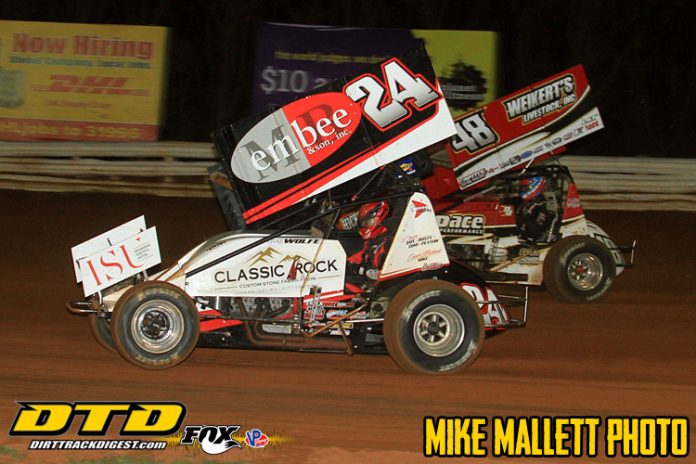 BROWNSBURG, IN – After having to wait an extra week due to Mother Nature’s failure to cooperate, the Arctic Cat All Star Circuit of Champions presented by Mobil 1 will officially kick off the championship points season this Friday through Sunday with a tripleheader in the Keystone State, ready to battle the best of the best of Pennsylvania Posse Country for a trio of $5,000 top prizes. The All Star invasion of Central Pennsylvania will commence on Friday evening, April 13, with the annual Tommy Hinnershitz Memorial at Williams Grove Speedway.

Strengthened by a diverse roster nearing 20 full-time competitors, the talented All Stars will work to snap a 32-race winless streak at The Grove, failing to beat the Pennsylvania Posse on all attempts since first visiting the paperclip-shaped half-mile in 1970 . Lance Dewease is the defending Tommy Hinnershitz Memorial champion, holding back Freddie Rahmer and Tim Shaffer for the four-figure payday.

Capping off their three-day swing through Central Pennsylvania, the All Star Circuit of Champions will attempt to tame Bedford Speedway on Sunday evening, April 15 – the oldest active dirt track in the state of Pennsylvania.

Honoring the late Bedford Speedway promoter, the Roy Morral Classic will headline action at the Bedford Fairgrounds half-mile on Sunday evening; the first and only appearance by the traveling All Stars in 2018. Midwesterner, “Blackjack” Brian Brown, defeated the All Stars during their most recent visit in September, holding back Findlay, Ohio’s Caleb Helms and Australia native, James McFadden, at the final checkers.


Fans who are unable to make the journey to Central Pennsylvania for the All Star tripleheader are invited to tune-in live via Speed Shift TV. A pay-per-view broadcast will be available for purchase during all three All Star events beginning with the Tommy Hinnershitz Memorial at Williams Grove Speedway. Those interested should visit Speed Shift TV on the Web at www.speedshifttv.com.

Port Royal Speedway will allow pit access beginning at 3 p.m. on Saturday, April 14. A mandatory All Star drivers meeting will be conducted at 5 p.m. with hot laps to follow at 5:40 p.m. For further details, please visit Port Royal Speedway online at www.portroyalspeedway.com.

Bedford Speedway will open pit gates at 2 p.m. on Sunday, April 15. The All Star drivers meeting will be conducted at 5:30 p.m. with hot laps following at 6 p.m. Other information such as general admission gate times and ticket prices can be found at the official online home of Bedford Speedway: www.bedfordspeedway.com.