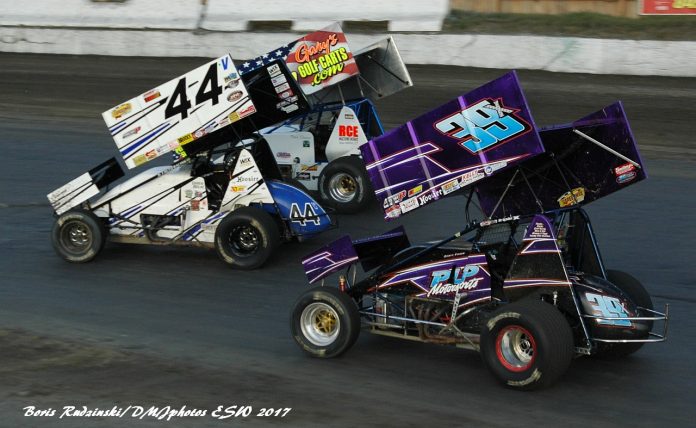 SODUS, NY – In just about one week’s time the stars and cars of the SuperGen Products with Champion Power Equipment CRSA Sprint Car Series will hit the track to kick off the 2018 racing season. The 13th season for the CRSA will kick off at the Fonda Speedway on Saturday April 28th in what has become the traditional season opener for the RaceSaver 305 series. The series returns to the Track of Champions on June 30th and September 15th.

The CRSA then moves to the legendary Orange County Fair Speedway in Middletown on May 5th. This will be the first of fours trips to the Hard Clay for the CRSA. The other events will be held on July 7th, August 25th and on the Saturday portion of Eastern States Weekend – October 20th. All of these events will be part of the Hard Clay Challenge Mini-Series. Circleville’s Thomas Radivoy was the mini-series champion last season.

Friday evening May 11th the series moves to New York’s Southern Tier and the Afton Motorsports Park. This will be the first of four visits to the fast, fairgrounds oval. The CRSA returns to Afton on Friday evening June 29th and August 3rd before competing in the next to last event on the 2018 schedule – the Brett Deyo Short Track Super Nationals event on October 5th. All of the events at Afton are part of the Algonkin Hotel Mini Series which was won by Rotterdam’s Josh Pieniazek one year ago.

After a weekend off the SuperGen Products with Champion Power Equipment CRSA Sprint Car Series moves to the high banks of the Woodhull Raceway on June 9th. One year ago, Pine Bush, New York’s Tyler Boniface picked up the win at Woodhull over eventual CRSA champion Jeff Trombley and Geoff Quackenbush.


The month of July will see the series head back to the Capital District of New York with the first of a pair of visits to the Albany-Saratoga Speedway. The Great Race Place will hold events on July 13th and September 14th. Both events will be a part of the Kennedy’s Towing Northway 90 Challenge Mini Series. Each of the events at the Fonda Speedway will also be a part of this mini-series. The 2017 version of the mini-series was won by Jeff Trombley.