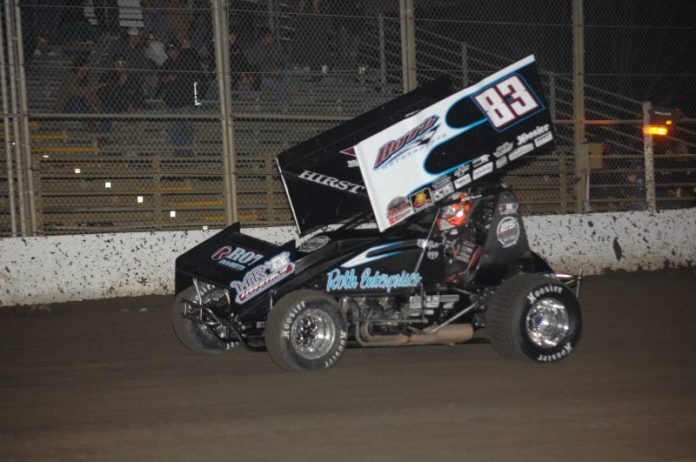 Croft, who started on the outside of the front row, was the class of the 22-car field for most of the event. He took the lead away from dash winner Mathew Moles on the second lap and two laps later began the process of slicing and dicing his way through slower traffic.

The action behind the leader was intense as several drivers charged to the front. Hirst, who started fourth, got past Moles for the runner-up spot on the seventh lap. Thorsen drove the Tri-C Machine sprinter like a man possessed after starting in the 14th position. He was up to fifth after only three laps and shadowing Hirst every move by the fifth circuit around the quarter-mile oval.


The action came to a halt on the seventh circuit when Nathan Rolfe took a tumble in the third corner. He walked away unhurt.

At the midway point, Hirst and Thorson were back swapping positions on a corner by corner basis as the top four positions could have been covered by a blanket. Hirst stole the point away from Croft on the 16th lap, but a yellow flag negated the move. Another red flag a lap later, this time for an upside-down Gio Scelzi stopped the action again. Scelzi, who captured the semi, was not injured.

When action resumed, Thorsen powered past Hirst in the fourth corner and quickly began to reel in the Croft, who was being held up in traffic. The two frontrunners began to pull away from the field, but Thorsen spun out while negotiating a lapped car bringing out yet another caution.

It was Hirst time to shine now and he motored past Croft in an exciting drag race down the backchute with five to go. However, Croft wasn’t done and the duo pulled out all the stops in an action-packed wheel-to-wheel battle. Unfortunately, it wasn’t Croft’s night as he pulled off the track three-laps remaining with a flat left rear.

Hirst took no prisoners the remaining distance to score the popular victory and take away the KWS-NARC point lead from Shane Golobic by a 187-184 margin (unofficial.) Golobic, who started 12th in the 22-car grid scored a solid second place at the checkered, driving the Tarlton Motorsports Tachi Palace-sponsored KPC. That was good enough to earn him the Swift Metal Finishing hardcharger award.

“This is great,” said a pumped up Hirst afterwards. “It’s always exciting to have a race like this and come out on top.”