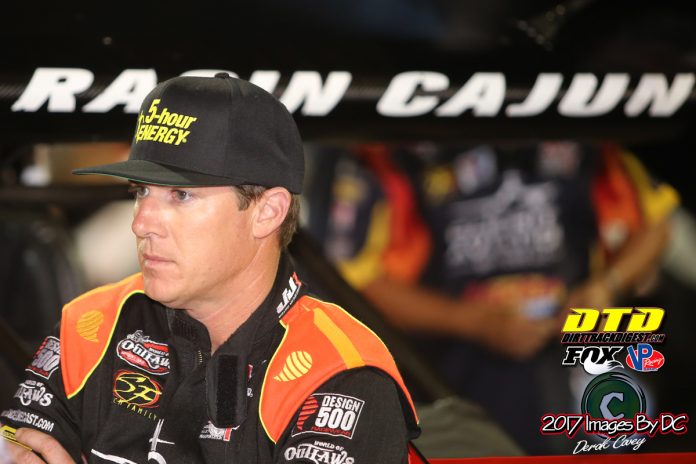 ELDON, MO – It’s not very often that a World of Outlaws Craftsman Sprint Car Series team only has to drive about 15 minutes from their shop to get to a race. For Jason Johnson, who now calls Rocky Mount, Mo., home that will be the case on Friday, May 4 as the series returns to Lake Ozark Speedway in Eldon. The track is just 10 miles from Johnson’s home.

The World of Outlaws Craftsman Sprint Car Series event at Lake Ozark Speedway will be the first for the tour at the track since 2007 and just their third-ever visit. Johnson has raced at the track about 10 times over the years and has a couple of wins at Lake Ozark in American Sprint Car Series (ASCS) competition. He also raced with the Arctic Cat All Star Circuit of Champions at Lake Ozark Speedway. Johnson is quick to downplay any type of “home track advantage” one may think he has.

“With the World of Outlaws, there is never any advantage,” said Johnson. “They don’t give you anything. We have to go out and put a whole night together, like any other night. Obviously, we have some past notes from there, but that was a different form of racing. The intensity level with the World of Outlaws is as tough as it comes. You have to be on top of things if you are going to pull off a victory.”

Johnson compares Lake Ozark Speedway, a banked, third-mile to Willamette Speedway in Oregon, which is a high-banked, three-tenths-mile. Johnson won at that track last year, after battling 2013 series champion Daryn Pittman in heavy lapped traffic for the top spot.

“We’ve had some success in the past at Lebanon, Oregon,” he noted. “It has a similar shape, but I’m not so sure about the surface size. It’s definitely going to be challenging at Lake Ozark and is going to be a lot of fun. It will certainly be an action-packed night of racing.”


Johnson will have a large contingent of family, friends and neighbors cheering him on at Lake Ozark Speedway. He also will get to race in front of some of the partners of his Jason Johnson Racing (JJR) team, who are local in the Lake Ozark area of Missouri. For the veteran driver, it is paramount for those who are supporters of his team, to get to see him race in person.

“We have such great local support, so it is important on a few levels for us to race at Lake Ozark Speedway,” shared Johnson. “Normally, our fans have to travel pretty far to see us race at places like Knoxville (Raceway in Iowa) or Pevely (I-55 Raceway, near St. Louis). Now, they can see us race in our own backyard. It’s definitely great to be back in the area. For our partners who are local: Fischer Body Shop, Pro Powder Coating and Tiger Towing, who is on board, specifically for the Lake Ozark race, it is great for them to get to come see us. I also have to offer a special thanks to Bub Caldwell for his support of a local racer.”

Heading into the event at Lake Ozark Speedway, the World of Outlaws Craftsman Sprint Car Series has competed 14 races this season. They have had another 11 races effected by rain, with five of those cancelled and four re-scheduled, including two that has to be re-scheduled a second time, after the original makeup date was postponed by rain. Johnson and his team made the most of the downtime this spring to fine-tune their program to be even more prepared for the heart of the season.

“The rain has been hard on everyone for sure,” he explained. “We are used to racing quite a bit more and you try to get in a pattern and you have a week off. For us, we’ve taken advantage of the time off. We’ve done a lot of things and made some subtle changes throughout the week when we had time off. We feel like we will be better when the season really gets rolling. We are well-prepared, as I’m sure most teams are. This is probably the best preparation we’ve ever had going into a season, so we are looking for a great 2018.”

Johnson is currently tied for fourth in points on the strength of 11 top-10 finishes, with six of those being top-five performances as he chases his first win. The winner of the 2016 Knoxville Nationals won four races with the World of Outlaws Craftsman Sprint Car Series last year en route to finishing sixth in points. Johnson’s best finish of the season to-date has been a runner-up performance at Volusia Speedway Park in Florida on the second night of the season. He also has three third-place showings. Last weekend at Devil’s Bowl Speedway in Texas, Johnson was fastest in time trials both nights, including setting a new track record in the opener.

“It’s been an okay start to the season,” he stated. “I wouldn’t say it’s a great start. We would love to be more consistently in the top-five. When you start racking up top-10s, the top-fives will come. We had the potential to get a couple of wins and got beat in the closing laps. You have to stay after it. You have to keep digging, be consistent and stay persistent. The World of Outlaws is the toughest series in the world. Even some of our NASCAR drivers, they dream of racing against the tough World of Outlaws. It’s a lot of fun and I look forward to the challenge and hopefully this is the year we have a breakout year and win multiple races.”

With the way the format is with the World of Outlaws Craftsman Sprint Car Series, Johnson points out that being fast for the entire night is a must. Traditionally, the track surface at Lake Ozark Speedway has played into the way that he drives and Johnson hopes this is the case again this weekend.

“You need to be fast from the time you drop the backdoor (on the trailer) and unload,” said Johnson. “You have to have fast laps in qualifying and run good in the heat race and try to get in the dash and get the positioning right. Lake Ozark, in the past, has built a really nice cushion and generally fits my style. To see big slide jobs and run around the curb is kind of my forte. I’m looking forward to it. I think it’s a place where I can pound on the cushion and keep it going.”

Johnson will open the event by making an appearance at The Lodge at Port Arrowhead, which will host a “Night before the Outlaws Party” on Thursday, May 3. The gathering will feature live entertainment, beginning at 7 p.m., along with food. On display, will be a couple of World of Outlaws cars, with drivers on-hand to Meet and Greet fans. The Lodge at Port Arrowhead, which overlooks the lake, is located at 3080 Bagnell Dam Blvd. in Lake Ozark.

Tickets for the World of Outlaws Craftsman Sprint Car Series return to Lake Ozark Speedway in Missouri on Friday, May 4 can be purchased in advance online at https://slspromotions.ticketforce.com or by calling 815-344-2023 as well as at the track on race day.