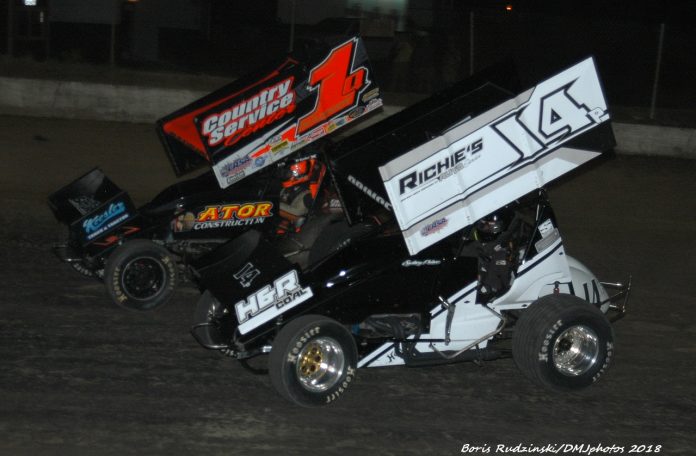 SODUS, NY – Thomas Radivoy finished the 2017 SuperGen Products with Champion Power Equipment CRSA Sprint Car season watching Jeff Trombley crowned series champion at the annual banquet. When all was said and done and the final tallies taken, the Circleville driver finished in the runner up position by a mere eleven points.

Fast forward to the 2018 CRSA Season opener at the Orange County Fair Speedway and Radivoy did something that he did in 2017 – dominate the House of Power. Radivoy put the Country Service Center/Ator Construction/Keesler Truck and Tractor machine in victory lane for the fourth time in the last five events at the big, five eighths mile track.

Scott Flammer joined Radivoy on the front row for the 20 lap A-Main. When the green flag waived Radivoy jumped out to an early lead, while Flammer slid back. Radivoy went through the first half of the race largely unchallenged. He would continue to lead during the second half of the race and did so rather comfortably until slower traffic allowed second place runner Sydney Prince to close in and get along side.

When the final checkered flag waived Radivoy would pick up the win over Prince, Bobby Hackel, IV, Flammer and Christian Rumsey. Heat races were won by Trombley and Prince.

“Our race started off pretty good,” Radivoy said. “We were strong in the beginning and when I got caught up in lapped traffic is when it started getting a little tricky. “We didn’t know it but the top wing tree broke, so all of a sudden it got loose and now I know why.”


Radivoy would continue, “Sydney was coming for me; these other guys are going to have to look out for the rest of the year for sure. We are now probably going to run for points again this year, we weren’t planning on it but this was a great way to start the year. “

“I have got to thank my dad, this one is for him,” Radivoy offered. “He has got kidney failure so as soon as the season is over I am going to donate mine to him so we can keep going racing harder for next year. I have to thank Steve, he is always here for me at every race, my engine guy Dave Leonard from KS Cart Shop, Country Service Center, Ator Construction, Hufcut Concrete and all of the fans and other drivers that were here tonight.”