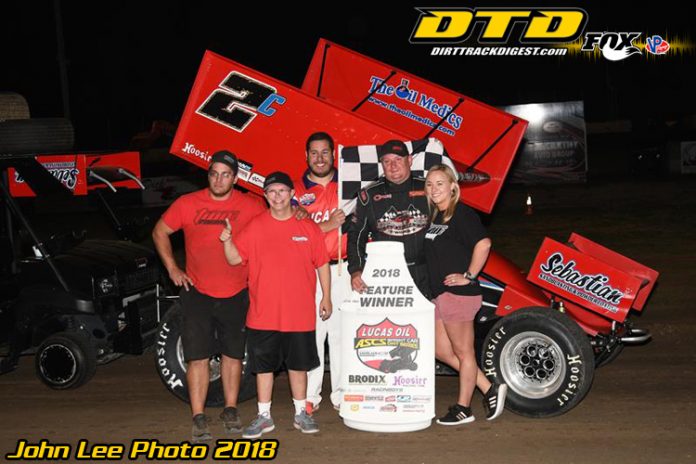 HUMBOLDT, KN – Picking up his first victory of the season with the Lucas Oil American Sprint Car Series presented by Sawblade.com, Wayne Johnson got the win in the series debut at the Humboldt Speedway on Wednesday night, making it seven events with just as many winners so far in 2018.

Leading all 25 laps at the Kansas bullring, the win is Johnson’s 51st overall and second in the state of Kansas with the National Tour. Wayne’s last trip to Victory Lane came on July 4, 2008, at Lakeside Speedway where the series will race on Thursday, May 10. The win also brought Johnson within a single point of the Lucas Oil American Sprint Car Series presented by Sawblade.com point’s lead.

“First off I have to thank Vern and Slippy. They worked their butts off on this thing. Vern’s just here for a little bit trying to help get me lined out, but our short track program is really good right now,” commented Johnson. “Last year we came here for a Regional show and we stunk up the place, so we just threw something at this thing and it worked. We have Lakeside tomorrow, so we’ll see if we can get our big track program rolling there.”

Able to beat Blake Hahn into the first two turns, Wayne would have to do it a second time as the caution flew before a lap could be completed. Collecting Kyle Bellm, the No. 14k was able to restart after contact with Parker Price-Miller. Back to green for four laps, the caution was followed by the red as Scott Bogucki slammed the wall in turn one. Scott was okay but done for the night.


Single-file to the start, Johnson rolled the top of the Humboldt Speedway into the first and second turns with Blake Hahn in tow. Unable to advance past the No. 2c, Hahn kept close as the pair worked to slower traffic. Starting to ramp up his run at the race’s mid-point, Hahn set sights on the lead only to have the caution lights blink on for debris in the fourth turn.

With clean track ahead, Wayne worked carefully around the Humboldt Speedway as the groove migrated to the bottom. Careful to hit his marks, the final five laps saw the back of the field about to come into play. Able to avoid racing the back-markers, Wayne held on to victory by 1.117 seconds.

Hahn’s third trip to Humboldt Speedway in ASCS competition, the Griffith Truck and Equipment No. 52 has not finished off the podium as the final step was filled by the driver of the Rush Truck Centers No. 14 of Tony Stewart who advanced from the eighth starting spot. Stewart was also Wednesday’s CP-Carrillo Hard Charger of the Night.

Johnny Herrera in fourth was trailed by Matt Covington to complete the top-five. Sam Hafertepe, Jr. was sixth with Parker Price-Miller ending up seventh. Seth Bergman in eighth continues to hold the top spot in the tour standings with Tyler Thomas finishing ninth. Subbing for Travis Rilat in the BDS Motorsports No. 1, California’s Logan Seavey rounded out the top-ten.

The field of 25 drivers was dropped into a trio of BMRS Heat Races with Blake Hahn, Johnny Herrera, and Parker Price-Miller taking wins. No B-Feature was contested so no Provisionals were needed.

Heat Races (All drivers advance to the A-Feature. Top 8 Redraw)