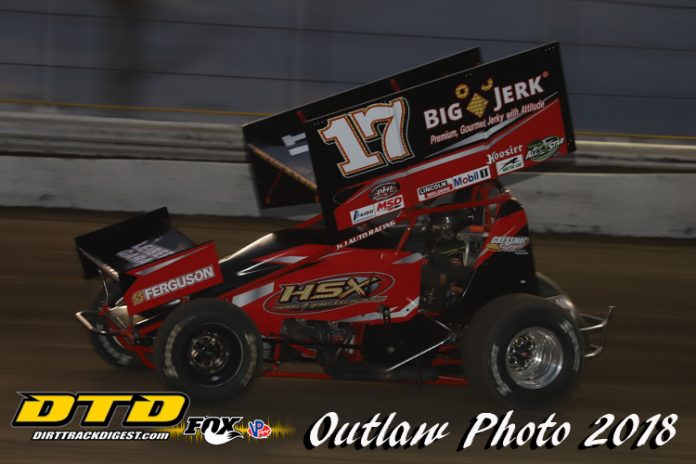 BROWNSBURG, IN – The Arctic Cat All Star Circuit of Champions presented by Mobil 1 will invade the Badger State for the first and only time in 2018 during the upcoming weekend, set to challenge the Interstate Racing Association (IRA) Outlaw Sprint Series for a pair of $5,000 top prizes on Saturday and Sunday, May 19-20. The IRA/All Star Challenge doubleheader will ignite on Saturday evening at the Plymouth Dirt Track at Sheboygan County Fairgrounds, followed by a visit to Angell Park Speedway in Sun Prairie.

The Wisconsin road trip will help kick-off a busy nine-day segment of the 2018 All Star schedule that includes five events at five tracks in two states, concluding with the inaugural Bob Hampshire Classic at Waynesfield (Ohio) Raceway Park on Sunday, May 27.

Despite logging countless miles throughout the state of Wisconsin, sanctioning 20 events throughout a 30-year span, Tony Stewart’s All Stars have made only one prior visit to the Plymouth Dirt Track at Sheboygan County Fairgrounds, that occurring in 1995 when Kevin Huntley took home top honors.

Although making a quick stop at the Sun Prairie oval in 2017, the upcoming weekend visit to Angell Park Speedway will be a first-ever for the All Star Circuit of Champions. The 2017 appearance was cut short due to rain just after qualifying time trials.

Entering the weekend fresh off of an All Star Circuit of Champions victory at Sharon (Ohio) Speedway on May 5, Clute, Texas’ Aaron Reutzel will lead the All Star charge into Plymouth Dirt Track on Saturday afternoon, now on top of the Series driver standings by ten markers over Attica Spring Nationals winner, Jac Haudenschild. The pilot of the Baughman-Reutzel Motorsports, No. 87 entry owns four top-ten finishes in five point-earning starts so far this season, two of which occurring inside the top-five.


Kokomo, Indiana’s Parker Price-Miller will enter the Wisconsin doubleheader third in the All Star driver championship chase, trailing the top spot by a mere 30 points. Six-time and defending All Star champion, Chad Kemenah, will enter the weekend fourth in the driver standings, followed by the “Buckeye Bullet” Dave Blaney.

In addition, All Star Circuit of Champions owner, Tony Stewart, is expected to join in on the action at Plymouth Dirt Track and Angell Park Speedway, as well as former Chili Bowl Nationals champion, Rico Abreu.

Adding extra hype to the Wisconsin doubleheader, MAVTV Motorsports Network, the official television partner of the Arctic Cat All Star Circuit of Champions presented by Mobil 1, will be on hand to capture all of the action from Plymouth Dirt Track and Angell Park Speedway. The pair of programs, two of eight All Star events on the 2018 MAVTV schedule, will be broadcast via tape-delay on September 2 and September 9, respectively. Each event will air twice during its scheduled replay date; 8 p.m. and 11 p.m. ET.

About MAVTV:
MAVTV Motorsports Network is a television network with its roots deep in the automotive world. MAVTV offers an unparalleled line-up of exclusive motorsports that includes prestigious events such as the Chili Bowl, the AMA Pro Motocross series, and the Automobile Racing Club of America (ARCA). But MAVTV also covers a multitude of grassroot racing from the US and across the globe including drag boats, sprint boats, drag racing, pro pulling, rally racing, drifting, dirt racing, ice racing and everything in between plus a package of automotive reality and custom build shows. If it has a motor, it’s on MAVTV. For more information, visit www.mavtv.com