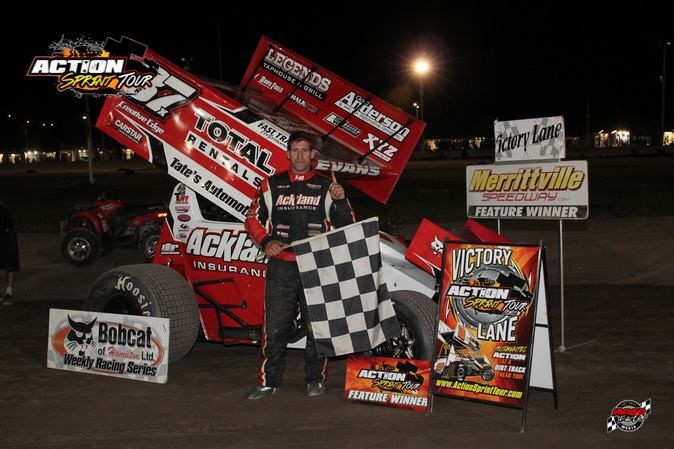 THOROLD, ONT – Shone Evans took the lead from Brad Herron on lap 13 and survived a pair of restarts over the final seven laps to earn his first career win with the Action Sprint Tour powered by RaceRivalz.com at Merrittville Speedway on Monday night.

“My team is, wow, without them I’m nothing,” Evans said in Victory Lane. “They get my car going good every night. The boys back in the pits had me setup pretty good. It was a little loose, but it worked out.”

Herron and Ryan Hunsinger drew front row starting positions for the main event after finishing in the top two of heat three. Both drivers had the option to take the Durnin Motors Front Row Challenge. The two front row drivers had the chance to give up their starting spots to drop to the 12th starting position for a chance at a $500 bonus courtesy of Durnin Motors if they could win the main event from the sixth row, however both drivers elected to keep their top spots.

Herron and Hunsinger raced side-by-side for the first three laps until Hunsinger prevailed with an early lead in the outside lane. The top two quickly opened a 10-car length advantage over third-place running Evans. Their advantage was erased, though, on lap three when Davey Boughton spun in turn two.


On the ensuing restart, Hunsinger got an excellent jump in his Transport Sales and Service No.43h. As Hunsinger ran the high side, Herron continued to stay low. Hunsinger continued to search for moisture on the outside and looked a little too far at the exit of turn four on lap nine as he stuck the right-rear tire into Merritville’s infamous front stretch moat, allowing Herron to drive by for the lead.

After Herron had the top spot, Hunsinger tried to recover the lead, but on lap 10 went over the end of turn four and spun to bring out the second yellow of the race. Hunsinger later revealed the left-rear shock had broken on his car. The caution promoted third-starting Shone Evans to second behind Herron and ahead of Holly Porter, 15-year-old pilot Liam Martin and Jesse Costa.

Herron maintained his lead for two laps until Evans got an excellent run down the backstretch on lap 13 and drove to the outside of Herron with a burst of momentum that allowed him to grab the top spot off of turn four.

“I saw how Hunsinger and Brad were running the turns, so I knew I had a little bit more than they did,” Evans explained. “I just waited for my time and finally got around him.”

On the ensuing lap, the caution waved for the third time when Mike Bell parked his No.99 at the exit of turn four. Evans had no issues on the following restart and drove away from Herron to a half straightaway advantage with five laps to go.

Behind the top two, the battle for third raged on between Costa, Martin and Porter. After Evans took the white flag and appeared to have the race sewn up, the caution flag waved for the final time when AJ Lewis spun at the top of turn four, just in front of the leader.

The spin setup a green-checkered finish where Evans made no mistakes on the final lap to seal his first win with the Action Sprint Tour powered by RaceRivalz.com while Herron settled for second. Contact at the finish in the battle for third sent Costa sideways under the flag stand, but he held on to the final podium spot ahead of Aaron Turkey and Porter. Turkey was also the hard-charger of the race, advancing 12 positions from 16th to fourth.

After his third-place finish at Merrittville and a second-place result on Friday night at Ohsweken, Costa takes the early point lead away from the Action Sprint Tour’s opening weekend.

“It’s awesome,” Costa said of his strong opening weekend. “I’ve never led the points in (Sprint Cars) or ever been close. I have to thank Wells Foundry, DNO Towing, Best Safety Training and Magnum Signs for being so supportive of all this.”

Costa, Evans and Hunsinger won qualifying heat races. All 25 cars qualified for the 20-lap main event, which eliminated the need for a B-Main.