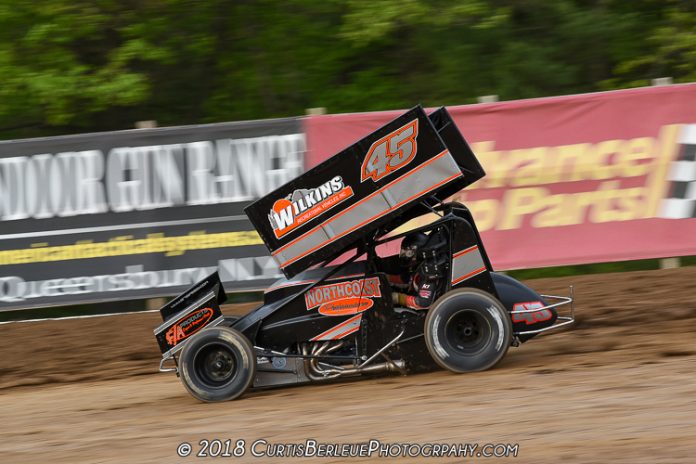 MALTA, NY –  Chuck Hebing was in the right place at the right time on the final lap as the Ontario, New York driver was able to tally his first Patriot Sprint Tour win of the 2018 season, and his 46th A-Main of his career. Prior to the start of qualifying, Amsterdam Trailer’s added $1,000 to the winner’s purse which made it $3,000 to win.

35 of the best 360 Sprint Cars in the northeast packed themselves into the pits of the Albany Saratoga Speedway as Danny Varin, Jason Barney, Matt Tanner and Steve Poirier scored the heat wins. Darryl Ruggles picked up the newly sponsored Bonnell’s Rod Shop Dash For Cash event. Chad Miller scored the B-Main Event.

Quebec’s Steve Poirier and Stephentown’s Matt Tanner would bring the 22-car field to the green flag and Poirier would jump out to the early lead separating himself from the field. Danny Varin would immediately solidify himself as the second-place car in the opening laps and would begin to track down the leader.

It would also be a constant battle for positions third through sixth between Chuck Hebing, Jeff Cook, Jason Barney and Davie Franek as they used all inches of the race track.


On lap nine, Varin would finally get a strong enough run underneath Poirier to take command but would lose it exiting four and Poirier remained the leader at the lap ten marker.

Varin would get another crack at Poirier on a lap 14 restart thanks to an in adverted caution, but this time he would clear Poirier on the back stretch and be scored the leader on lap 15.

Varin would lead Poirier with Hebing, Barney and Franek completing the top five. Then on lap 22, Varin sustained front end damage on his own to bring out the second yellow of the A Main which would give the lead back to Poirier.

On the ensuing restart, Barney would power around Poirier out of two but would make contact sending him into the into the field bringing out another caution.

This put Davie Franek in the runner up position also getting a great run on the restart by almost clearing Barney going wing to wing heading to the white flag.  Going down the front stretch, Franek would make an immediate dive to the bottom of Barney heading into turn one and attempt to shut the door exiting two.

However, Barney would also make contact with Franek allowing Chuck Hebing to squeeze by both of them and lead the lap that paid $3,000. Barney came across the line second but would be penalized two spots for rough riding. Jeff Cook would end up finishing second followed by Cory Sparks who would make a late charge coming from 12th to third.

Billy VanInwegen came from 17th to 6th and would take home the Casey’s Truck Salvage ‘Salvage of the Night’. Derek Jonathan would be the final car to take the checkered flag and he would go on to earn the Prestige Pool & Spa ‘Final Finisher’ award.

The Patriots will now head West to Ransomville Speedway on Friday June 1 for the lone appearance of the 2018 season. They will back that up with a trip to the Fulton Speedway the next night.